Kendra James: Senator of the US tied and gagged in her office by an angry voter – Hollyrope

Kendra James is a young Senator of the United States. This sexy redhead is an elegant and very powerful woman. One day in her office she receives a call from her secretary: some angry man wants to talk to her, but Senator James doesn’t have time for that, she tells her secretary to tell the guy to leave. But a few minutes later this guy walks into her office. Kendra is surprised her secretary let him pass, but actually he overpowered her secretary and tied her up, now he wants to talk with the Senator. The dude is very mad because Kendra James approved a proposition to cut assistance for the unemployed in their 30’s in order to use that money to help the elderly. This dude is really upset because he got his unemployment check cancelled, but this dude is an asshole: he has been living of unemployment checks for the last 2 years and a half! But the angry dude doesn’t care, he wants his check and he blames Senator Kendra James for that, so he grabs the redhead politician and tapes her hands behind her back with a lot of duct tape. They got into an argument but Kendra gets interrupted constantly by handgags. Kendra is also zip tied, with the zip ties over the duct tape, making it impossible to get free, then her body is tightly taped up. After a long (and hilarious) arguing, Kendra is tape gagged, and left to struggle!! Video has been shot in a TV set, so the office looks so awesome, also this video is very political incorrect, we take it with humor and the polemic political subjects in this video are not taken very seriously, just have fun and laugh with the jokes and Kendra’s awesome performance!! 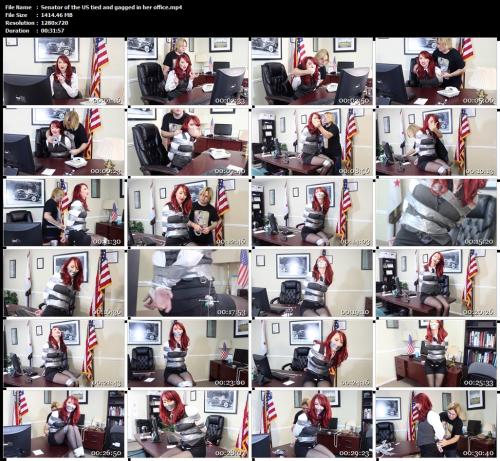 I Tied Up My Wife’s Hot Sister