In nothing but a garter, thigh high Cuban stockings and high heels Kat is woken up to Ivan who roughly grabs her. The leggy girl is startled awake. Her wrists are bound as she groggily asks Ivan ‘what the hell he’s doing to her.’ “I’m sleeping!” Kat says. Her ankles are tied next. She says she ‘needs her beauty rest”. Ivan doesn’t care. He tells her she said, ‘she’d enjoy being tied up.’ Ivan was going to make her live up to her words. Her knees are tightly bound next. Ivan tells her he doesn’t like to be tricked. Clearly, Kat led him on. Ivan was going to make sure she kept her promise one way or another. Kat says she hates being tied up. She screams as her elbows are bound. Ivan thinks it’s cute how she’s playing hard to get. It doesn’t really matter anyways though. Either way Ivan is enjoying tying the feisty bitch up. Kat is pulled into the sitting position where he hand gags her, before stuffing her mouth good and wide. He uses some very heavy duty blue duct tape which he wraps around her head to hold the gag in place. He orders her to struggle sexily. Not being able to figure out how to get away, she does as Ivan orders. Kat is quite flexible and literally bends backward at her torso. This is something most girls could never do. Her heels are tied next. They are connected to her elbow rope. She is bent into a pretty little pretzel. Ivan clearly wants to take advantage of all that sexy flexibility. Her mouth is packed so wide all she can do is cry into her gag as Ivan gives her some well placed, hard ass smacks. She’s rolled onto her side where Ivan informs Kat of his plan to bring her to his friends place so they can have even more fun. Ivan lifts the yelping, tied girl over his shoulder and carries her away. Of course, Ivan always gets what he wants. Poor Kat. It looks like they are off to a great start. 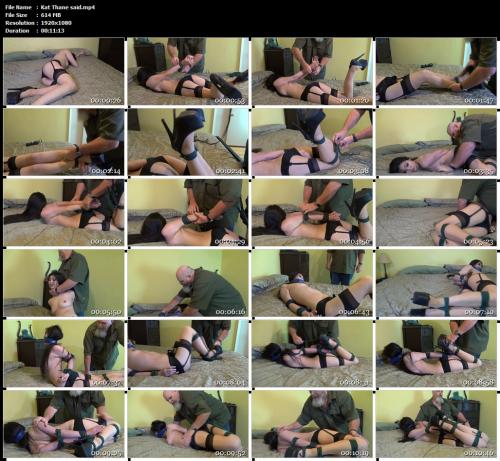