Je C is VERY excited to be auditioning for an independent film. The role calls for her to spend the majority of her screen time in tight bondage, so she agrees to a screen test to see how she’ll fare. Ankles, legs, wrists and elbows are lashed together and her mouth stuffed with cloth and sealed with vet wrap so she can give the test her all! She struggles and “mmmppphhs” for help, giving the damsel role everything she has, and she lands the role! Unfortunately for her, there IS no movie! Just an elaborate plot to secure helpless unsuspecting women and sell them overseas! Knowing that no one knows her whereabouts, she begins to struggle in earnest as a ball gag is strapped into her mouth and ropes pull her chest down to her knees! Her mobility greatly reduced, she begins to beg for release, her garbled calls for help causing her to drool all over herself. She’s getting desperate as the drool flows down her chin, making a mess of her pretty clothing. Her captor ignores her pleas, and the helpless girl works her way to the floor, only to find herself truly stuck! The drool flows heavily, cascading into her dreadlocks as he adds more ropes to her plight, ensuring she’ll never get loose. In desperation, she offers to find him more victims, but the offer is ignored. Now locked into a tight ball tie, her blouse opened, she begs for her captor to come back and release her, but her fate is sealed! 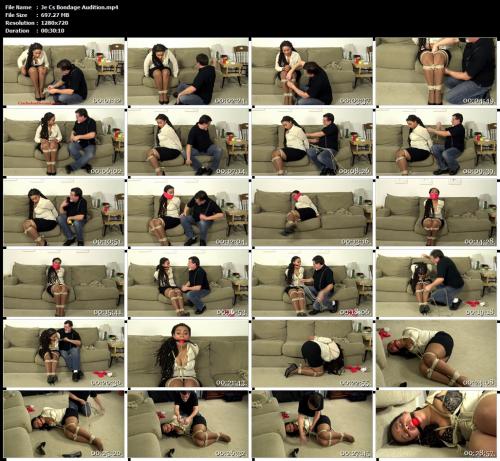 She got the knot on her friends elbows with her teeth but… – JJ Plush, Je C – Born to be Bound

Cinched and Secured – Getting A Leg Up On My Roommate!