The last time the School Bully picked on nerdy schoolgirl Chrissy Marie something in her changed and she actually started to like being tied up and gagged! Before long Chrissy and the School Bully were an item. Now Chrissy is always trying to show off her new found confidence to the School Bully by picking on the nerdy girls. She devised a plan to ambush Khristall, one of the most innocent nerds of all. Chrissy wants to tie her up and gag her just like he used to do her!

So they follow her home from school one day and when they know the coast is clear they sneak in and surprise the nerdy schoolgirl as she was busy studying. Khristall knows who they are but doesn’t know what they want, and it doesn’t take her long to find out! Chrissy keeps her tightly handgagged while the School Bully ties her up with rope. Then they stuff her mouth and wrap around tapegag her to keep her quiet! Chrissy Marie is having so much fun picking on the innocent girl as she helplessly struggles that she doesn’t see what’s coming next! Looks like the School Bully has some extra special plans for Chrissy! Hopefully she still likes being tied up! 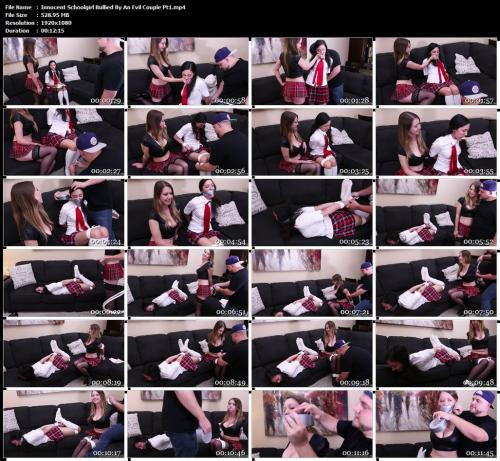