His son is in some kind of trouble at school. So, Joy the school principal, has called him into her office. When he gets there, she tells him that his son has threatened to tie up one of his teachers and they found him with some rope. Joy goes on to say that she realizes that boys sometimes have these kind of fantasies, but this type of behavior is not tolerated at the school. Joy playfully admits to the man that she herself has had similar thoughts about being tied up. But by someone much older. She then asks the man if when he was young, if he too thought about tying up one of his teachers. When the man admits that he did, Joy’s interest peaks. She gets up and goes to her office door to tell her secretary that she can have the rest of the afternoon off. She returns to the man and tells him that she has one last question for him. “Do you still think about tying up your teachers?” she asks him. When he tells her yes, she hands him some rope and asks him to tie her up. A short time later, Joy finds herself tied up very tight and she is very turned on. As she flirts with the man, he playfully tells her that he is going to have to shut her up. With that comment, Joy gets even more excited and when he stuffs her mouth with panties, she nearly has an orgasm. After leaving joy to struggle bound and gagged for a while, the man tells her that there was one thing he never thought of doing with any of his teachers because none of them had boobs as big as hers. He then brings out another piece of rope and pulls her big tits out of her bra. Using the rope, he ties them tight and pulls them up until they are sticking straight out. After fastening the rope so her boobs stay put, he crotch rope and hogties Joy. He then sits back and watches as she struggles bound and gagged with her great big tits bouncing about. 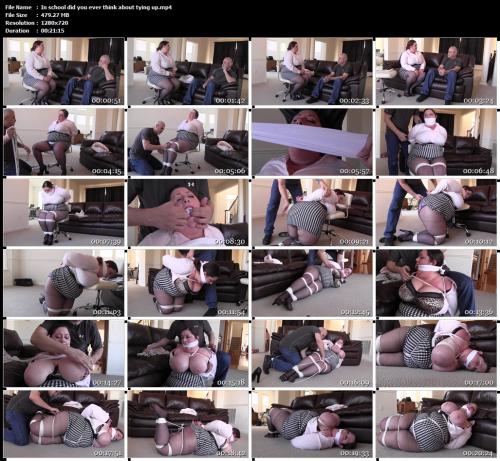