I’m being held captive by a thief who has kept me locked in a dark, scary closet while he tries to break into the safe. He was nice enough to let me out to use the bathroom but when he tells me it’s time to go back in I beg him not to put me back in the closet again! It’s so dark and there are spiders and I’m so claustrophobic that I would do anything to not go back in there! But he insists he has to lock me in there so that I stay out of the way. As I look around the room I spot some rope and I get an idea. I tell him he can tie me up and then I won’t get in the way and he won’t have to put me back in the closet! He eventually agrees to the compromise and starts to tie me up, but it’s not long before things take a bad turn! I wasn’t expecting him to tie my elbows together and pull my arms up into such a torturous position! And he stuffed a pair of dirty panties in my mouth and wrapped tape around my mouth and head to seal them in! There was no chance of calling for help anymore. He left me there all bound and gagged and I struggled desperately to escape from the ropes, or at least find a more comfortable position! Just when I thought it couldn’t get any worse he comes back and proceeds to bind me into a tight hogtie so that I can barely move! I thought I would rather be tied up than locked in that creepy closet, but I guess I was wrong! 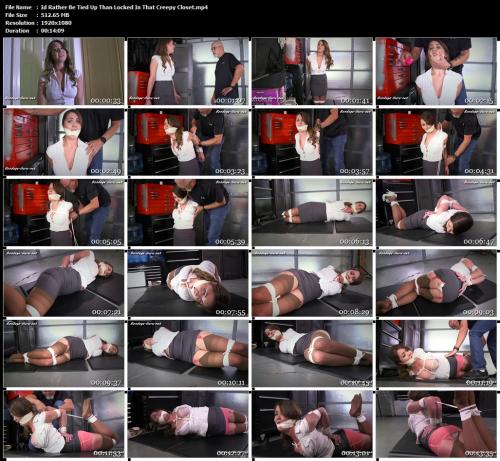