His daughter’s voluptuous girl friend came down stairs for a tight tying, a gagging and a hard ride – Voluptuous and Vintage Girls

He was allowing his daughter to throw a bachlorette party for one of her friends. And, to stay out of the way, he was downstairs in his basement. All of a sudden, someone came in. It was Joy, his daughter’s full figured girl friend who he knew had the hots for him. She told him that she was bored with the party and came downstairs to have some fun. But she told him that there was a catch. “If you want to get into my panties, you are going to have to tie me up!” she told him. So a short time later, Joy found herself all tied up on a chair. Joy was very turned and warned him that pretty soon she was going to get very loud. Especially when they really got naughty. Realizing that this was a hint that she wanted him to gag her, he stuffed her mouth and tied a torn rag over her mouth. Now bound and gagged, Joy could hardly control herself. When the man put her on her, knees, pulled her bit tits out and started to spank her, her moans go very loud and it was obvious that the gag needed to be improved. So he again stuffed her mouth and this time he wrapped tape around her face and mouth. After watching the buxom girl struggle bound and gagged for some time, he untied her legs. He told her it was now time for her to climb on top and go for her ride. 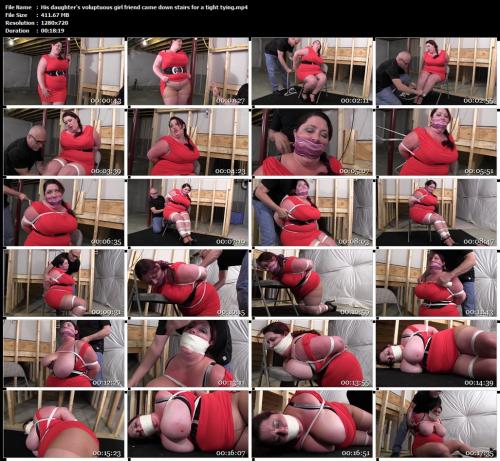