Chrissy had heard some rumors that her neighbor knew a thing or two about bondage, and she has always had fantasies up being bound and gagged herself. So one weekend while her husband was away on business she called him over because she was worried someone had broken in and was hiding inside her house. After looking around a bit the man found no signs that someone had broken in. She starts to tell the man she thinks it would be kind of exciting if someone did break in. Maybe they would tie her up tight and stuff something in her mouth so that she couldn’t cal for help! The man is surprised to be hearing this from Chrissy. She shows him a bunch of rope and ballgag, making it clear that she had planned this and made up everything about the break in. It doesn’t take long for her to convince the man to help her fulfill her fantasy. The next thing she new she was tied up tight in the ropes, helplessly drooling and she mmppphhhsss and moans in delight. Later he changes her gag to make it even more realistic by stuffing her mouth with panties and taping them in tight, just like a real robber would do! He finishes off by hogtying her and pulling out her boobs then leaves her to struggle and enjoy her perilous bondage fantasy! 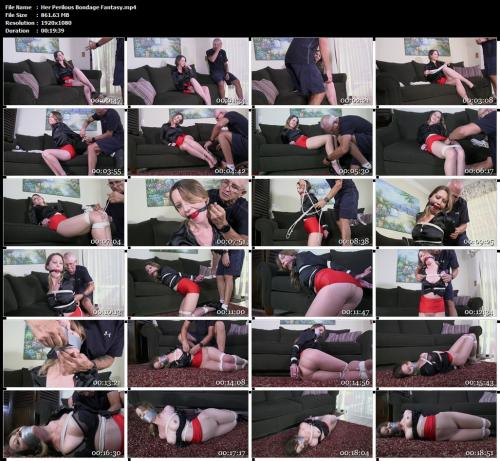