This video starts off with Hannah coming out of her room. She is on her cell phone talking with her boyfriend about their evening plans. But as she talks, Hannah doesn’t notice Dixie, a cat burglar sneaking up on her. As soon as she hangs up, Dixie grabs her and wrestles her to the ground. She brings out rope and quickly ties Hannah up. When she leaves Hannah struggling to go look for something to shut her with, Hannah works her way over to her cell phone. Instead of calling the authorities, like she should, she calls her boyfriend. But she only gets his voice mail. As she explains what is going on, Dixie returns and takes the phone away. Dixie then stuffs Hannah’s mouth with a pair of her panties and wraps medical tape tightly around her face and over her mouth to gag Hannah. Before leaving her again, Dixie decides to humiliate Hannah as punishment for trying to call for help. She does this by pulling her dress down and then pulling her bra down too. Hannah struggles desperately trying to escape. But Dixie is an expert at tying knots and later when she returns, Dixie finds Hannah just the way she left her. Dixie is now ready to make her escape. But first she hogties Hannah. A short time later after Dixie has left, the door bell rings. It is Hannah’s boyfriend. As he continues to ring the door bell with no one answering, he wonders where Hannah could be. He has no idea she is at the top of her staircase squealing through the tight gag and bouncing her big tits on the floor as she struggles to get loose. 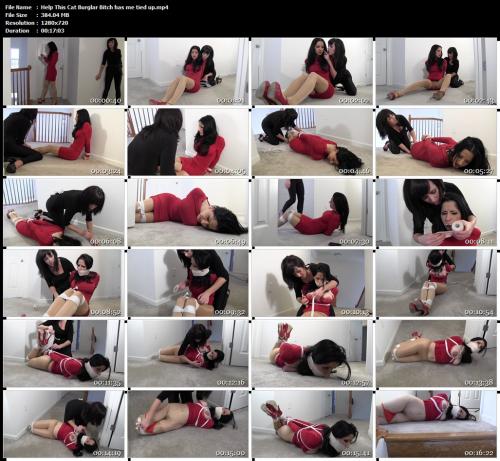