Whitney Morgan is walking down a hallway when a door opens and out walks a lady named Sahrye. She claims to know Whitney, but Whitney has never seen the lady before. All of a sudden, Whitney is grabbed from behind by a man and dragged inside the door. Together, he and Sahrye take her into a bed room. Whitney starts to put up a real fight, so the man holds her down with his hand over her mouth and tells Sahrye to tie her up. Then once she is trussed up, the man releases the hold over her mouth, but only long enough for Sahrye to stuff a pair of panties inside. After the man ties a rag in Whitney’s mouth to gag her, he and Sahrye finish tying her up. Sahrye is then left in the room to watch over the struggling Whitney. But at some point she leaves her alone and Whitney uses this opportunity to try to escape. She works her way off of the bed and finds a way to open a sliding glass door. But she only gets a few feet outside when the man returns and catches her. He drags her back into the room and after Sahrye strips her of her bra, he ties her in a strict hogtie with a tight crotch rope tied between her legs. Now left bound and gagged, Whitney can hardly move at all and there is no longer any hope of escape. 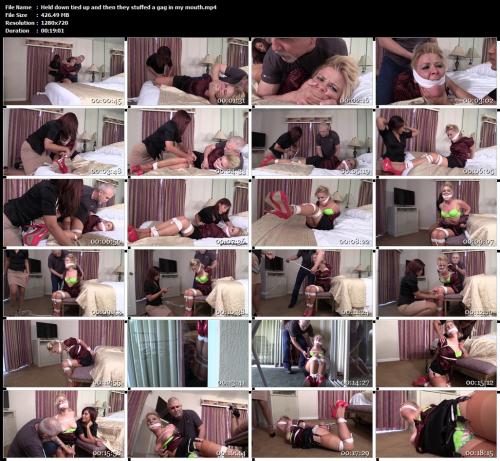