Michelle(Vicious Vamp)was hearing noises in her house. But rather than calling the authorities, she called her best friend Dixie. When she arrive, she and Michelle checked the place and found nothing. Just before Dixie was going to leave, she remembered needing a pair of shoes back that she had loaned Michlle. As Michelle went upstairs to get the shoes, Dixie waited downstairs. When too much tme went by and Michelle had not returned, Dixie went upstairs to see what was keeping her. When she went into Michelle’s room she found Michelle tied up and gagged. She ran to her and started trying to untie her. As she did this, Michelle was screaming into the gag trying to tell Dixie that the man who tied her up was hding in the closet. But Dixie could not understand what she was saying and all of a sudden, Dixie was grabbed friom behind by the man. A short time later, Dixie found herself tied up right next to Michelle. Then with Michelle looking on, the man stuffed and tied a pair of Michelle’s panties in her mouth to gag her too. The girls were left to struggle bound and gagged. They tried their best to try to help each other get untied. But the rope was tied very tight and they found it impossible to reach each other’s knots. Later, the man returned. He put Dixie on her knees where he crotch roped and hogtied her. Then after pulling her boobs out of her bra, she put her down on the floor. He then directed his attention to Michelle. After making sure her gag was tight, he pulled her great big tits out of her bra. Then as he was trying to decide which of the two girls he wanted to play with first, he heard a noise outside. Believing someone called the authorities, he ran out of the place, leaving the girls grunting through the gags as they tried to get loose. 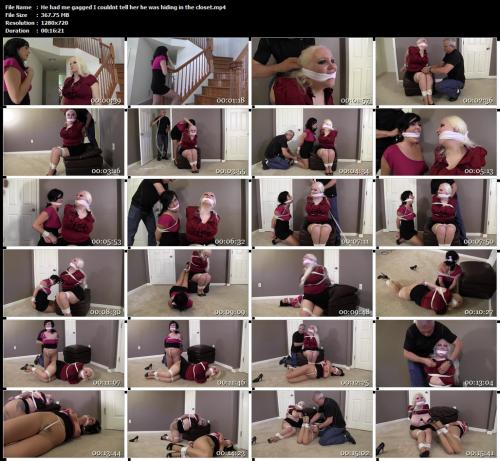