It’s now the wee hours of the morning when the girls come stumbling into their hotel room. It’s obvious they had quite a lot of drinks and enjoyed their girls night out! Just as they’re about to climb into bed they here a knock at the door. Chrissy thinks it’s strange but doesn’t think twice about opening the door to see who it could be. To their surprise as soon as they open the door there is a strange man threatening them! He had followed the two hotties back from the club, knowing that in their inebriated state they would be an easy target! They ask him what he wants and beg him not to hurt them. He tells them that as long as they do as he says then they nobody will get hurt! He just wants to have some fun with them!

The girls already don’t like the sound of that! They try to cover themselves up as they notice him checking them out in a really creepy way. Then he pulls out some rope and throws it at Constance, ordering her to tie her friend up! At first she refuses because she doesn’t want to hurt Chrissy, but he quickly reminds them who is in charge, scaring her into tying up Chrissy’s ankles and wrists nice and tight! Then he hands her a long cloth and tells her to put it in her mouth. Chrissy is really scared now too and really doesn’t want Constance to gag her but they have to do as he says if they don’t want to get hurt! Now he decides he wants to get in on the action. He hands Constance another white cloth and orders her to gag herself with it! She does so reluctantly after seeing what she just did to her best friend! Now the man pushes Constance back down on the bed and starts tying her up tight as Chrissy struggles and mmppphhhsss in the background, desperately trying to get free and find a way to call for help! Surprised at how feisty the two girls still are, he decides to tie them up even tighter! He binds both of their elbows together then removes their high heels and ties their bound wrists to ankles hogtying them. He has some fun tickling their bare soles and fondling them as they squirm!

Then he takes Constance’s cell phone so that he can call up her Daddy. See, while she was tying Chrissy up, she spilled the beans that her daddy is very powerful and has lots of money and that he could get him anything he wants if he doesn’t hurt her. At first he was just going to have his bondage fun then leave the girls to find their own way out of their predicament. Now he is going to hold them both for ransom instead! He leaves to make the call as the girls beg to be released from their tight ropes and gags. Once they are alone, they frantically gag talk to each other and try to figure out an escape plan, but as they struggle and squirm they become increasingly hopeless and distressed, realizing that there is no way they will ever make it off the bed and out the door if they can’t even manage to get free from their torturously tight hogties! 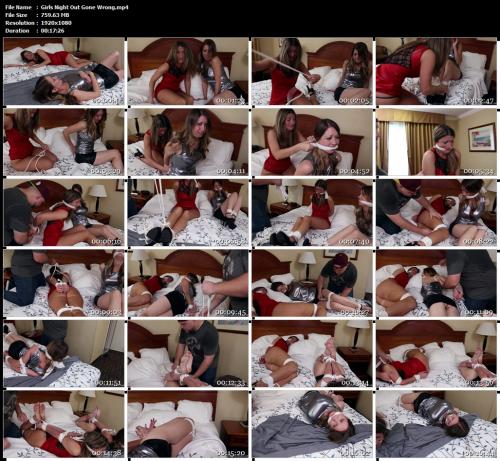