High powered executive Gigi Lynn has a board meeting to attend, but her mistreated underling has a different plan. Forcing the bitchy CEO into a deserted office, he binds her feet to ether side of the desk before stuffing a ball gag into her mouth to shut her up. Next, he ties a nice tight crotch rope up between her skirt, anchoring her wrists to it. The more she pulls to free her hands, the tighter it gets! To ensure she doesn’t show up at the meeting, he binds her arms to her body, running rope between her breasts to further humiliate her. Drooling and arguing behind the gag, she is helpless as he uses a final rope to pull her down, forcing her to stay bend over on the desk! With her safely secured, he’s off to take her place at the board meeting, leaving the girl to struggle in impotent anger. Drool spills put of the gag to puddle on the desk, the rope digs into her crotch, but no matter how she fights, she’s not going anywhere! When her underling returns, he tells her the good news: The board has made HIM CEO, and accepted her reluctant resignation! Spinning a story of her decision to move overseas, he’s guaranteed that no one will come looking for her as she begins her new life as his captive secretary, trapped forever in his home!! 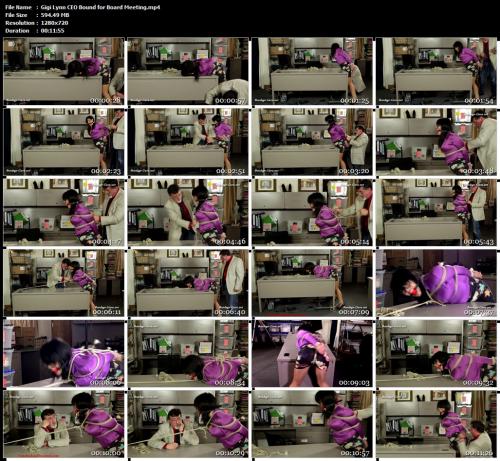