Genevieve’s boyfriend is always tinkering around with silly inventions, so when he tells her he has invented a new tape that will revolutionize the construction industry, she’s skeptical. He tells her that it sticks to anything, is stronger than steel and completely impervious to all elements. When she remains dubious, he decides to prove just how strong it is! The poor girl finds herself taped up in his new discovery, and completely unable to escape! Her hands are taped into useless stumps, her arms are taped behind her and fused to her body with yards of the stuff, her legs and feet are thoroughly wrapped up, and she’s well and truly stuck. She’s convinced, but her boyfriend has one more trait to demonstrate: the tape is also a perfect soundproofing agent! Before Genevieve can protest, her packs her mouth full of a thick foam ball and wraps her entire lower face in the new tape!! Her words reduced to a series of almost inaudible murmurs, she has to admit he was right! Unfortunately for her, he realizes to late that he hasn’t invented a solvent for the stuff, so there’s no way to take it off of her!! It’s too strong to cut, so she’s stuck! Her only hope is for her boyfriend to visit his partner in their secret lab and hope he has created a solvent! Left alone in her sticky grey bonds, she is furious at being tricked into being his unwilling guinea pig! She kicks and thrashes in anger, hoping to loosen the tape, but it’s on for good! Screaming and bitching into her gag, she knows she can’t be heard, but she tries for all she’s worth! She realizes she’s going to have to help herself, and decides that maybe her neighbors can get the tape loose, so she works her way to her feet and hops to the front door. Unfortunately, it’s locked, and with her hands taped into mittens, she can’t open it!! Frustrated, she hops across the room to her chest of drawers and tries to find something to cut herself loose with, but no luck. Finally she hops her way into the kitchen where she spies a pair of scissors hanging on the wall. She manages to knock them off to the floor, but is unable to grab them thanks to her taped hands! she leans her head against the counter in despair and frustration. Her only hope is for her boyfriend to return.with the solvent! 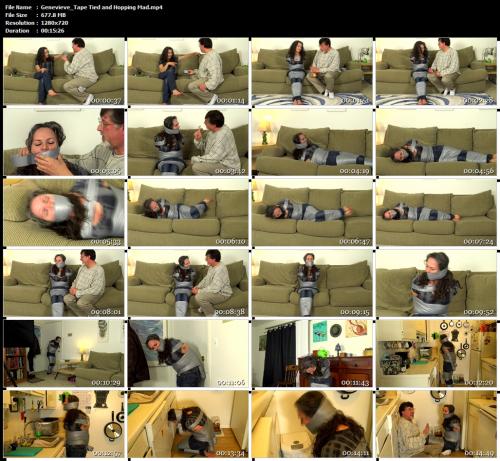