Farrah in a Gag-A-thon! Inept secretary gets tied up as a punishment and gagged several times – Hollyrope

Farrah is a cute, but lazy secretary who just didn’t deliver the report her boss asked her for. She claims she never received the email but her boss proves her the email was in her inbox. This time her mistake is going to cost a lot of money to the company so her boss is going to punish her. Farrah gets tied up, hands behind her back, and she’s going to be gagged, a hell of a lot! First she gets tape gagged with pink duct tape, her second gag is a red cleave gag. After that her boss decides to humiliate her a little bit more by taking her clothes off and let her wearing only her cute pink bra and panties and then she’s gagged with a white cleave gag. Next gag is a red ball gag, which she hates so much! After a while, her boss takes her ballgag off and gags Farrah with a camouflage-style bandana. Eventually she’s gagged with silver duct tape. A yellow cleave gag is next, Farrah is so tired of being gagged over and over, but she can’t do anything as long as she has her hands tied behind her back. Last gag is a black cleave gag, at thins point she wishes she didn’t screwed it up with the report…. 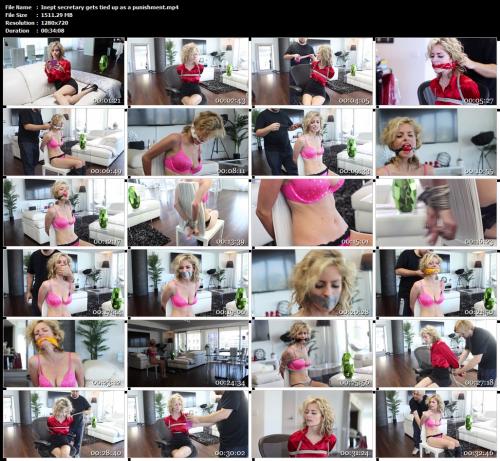 Karma – You So Cray Cray

Running Into Distress – Standard – Juliette Captured And In Distress [JoCoBoClips]