Sahrye is caught prowling around the hotel room of a notorious sex slavery ringleader. Feigning innocence, she claims she is in the room by mistake, but the evil slave trader knows better. He binds the wrists of the feisty Latina, wrapping tape all over her hands to fuse them into useless mittens. Unable to undo any of the knots securing her wrists, the girl is forced into a chair and held in place by strong unyielding ropes. To silence her, he stuffs a large pair of panties deeply into her mouth, then seals her mouth shut with duct tape. To ensure her silence, and to gaurantee she cannot work the gag free, he wraps her face again with vet wrap. Her words now reduced to a series of muffled grunts and “mmmmppppphs”, the slavery boss goes to work securing her even more tightly. By the time he is finished, she is bound with her ankles crossed, knees roped tightly together, ropes circling her body above and below her breasts and held fast with a series of leather straps for good measure. She knows she has to escape and she struggles like mad, but it’s no use. She never gives up, fighting like crazy when left alone in the room. Before she knows it, she finds herself bound again in a tight ball tie, clad in only her lingerie! Her mouth is stuffed again, and more duct tape forms a sticky cleave gag holding the packing in place. Finally, he reveals his plans for her. She’s been given an experimental elixir, designed to mold her mind into that of a willing and obedient sex slave, while wiping away all memories of her former life and identity. She has one hope: Make her way across the room to obtain the antidote, but time is short! The longer the elixir remains in her system, the stronger and more permanent the effect! She struggles her way across the room, the ball tie causing her to fall over and struggle to right herself. She reaches the antidote and finds to her horror it must be delivered via injection! With her hands taped into useless mitts, she can never administer the saving dose to herself! What will become of the feisty Latina now? 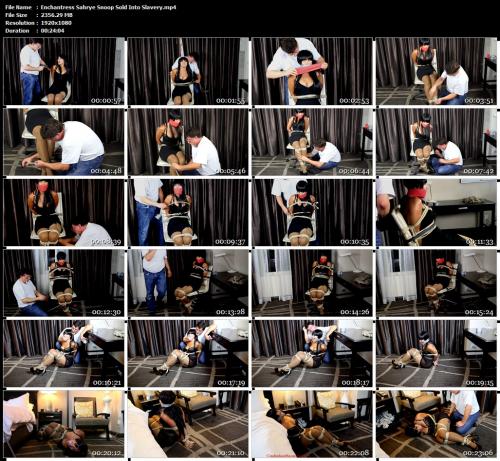