Chrissy Marie decided not to go out with her sorority friends tonight. She though she was doing the responsible thing staying in to study for her midterms, but she will soon realize she made a bad decision when a guy from the fraternity pays her visit to perform his final initiation prank. He was challenged to tape up one of the girls from the sorority and he has to get photos to prove it!

He sneaks in on Chrissy as she is playing on her phone and procrastinating her studies. She doesn’t hear him sneak up and before she knows it a hand swift covers her mouth and hand gags her tightly before she has a chance to scream. He secures her hands behind her back with some extra sticky duct tape as she begs and pleads to be left alone. She starts to get loud so he finds some panties and stuffs them in her mouth, wrapping several layers of duct tape around her mouth and head to seal it in, effectively muffling her attempts to yell for help. He finishes taping up her knee socked feet and legs, taking a peek up her short plaid skirt as she kicks and squirms to get away. He then decides he wants to see her tits, and he is sure the other guys at the fraternity would like that too! He exposes her breasts and adds more tape above and below her boobs, pinning her arms down and even further restricting her movement She helplessly struggles and mmmppphhhsss angrily at the guy as he takes photos of her taped up topless for proof!

As if it can’t get any worse than the whole fraternity seeing her like this, he ends up leaving her bound and tapegagged for the other sorority girls to find when they return! Chrissy desperately tries to escape from the tight tape but it’s hopeless. She then struggles to get to her phone and when she finally manages to retrieve it with her socked feet she calls for help, but the person can’t understand her and hangs up! She is stuck waiting for the other sorority girls to return from the club. They were already making fun of her for staying home and she can only imagine what they are going to say when they find her in this humiliating predicament! 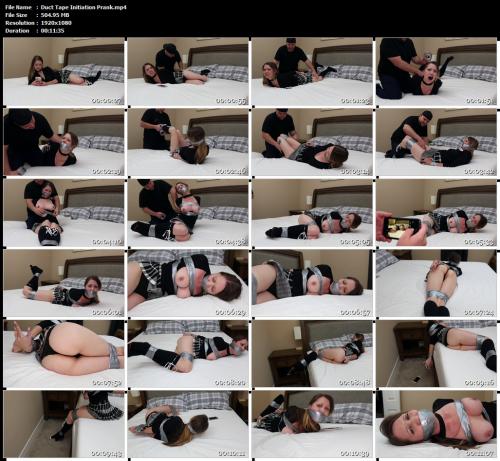