Beautiful 18 year old buxom blonde Delilah is all set to graduate, but has one last thing she has to do, publish her investigative story about corruption within the school superintendent office. She’s talking to her best friend and editor about all of this and seems confident that nothing can stop the presses until she gets up and is grabbed from behind by a masked man who bursts out of the closet. Handgagged into silence she is taken to the couch and asked about where the story is. She bravely defies the masked thug and proclaims that she’ll never give up the story, which just annoys her captor who suddenly ‘smothers’ her into ‘submission’. We next see her being carried into another place blindfolded with mouth cleave-gagged and wrists ziptied. She flails in his arms as he carries in and plops her on the couch. He then offers to free her and she calms down while he snips the ziptie off her wrists and removes her blindfold and gag. She immediately goes back into an obstinate state and tells him off, which gets her handgagged and fondled, much to her surprise. Some tape is brought out as the villain gags her with several pieces of tape before dragging her to her feet. He orders her to strip with a little ‘persuasion’ as she reluctantly obeys. Watching her the masked man can’t control his perverted nature and gropes her big tits and spanks and squeezes her nice ass. He even gets in behind her and fingers her from behind, which makes her wet despite herself (no joke this really happened!). Next, her wrists are bound behind her back and then a crotch-rope and rope around her tits are added, which serve to add some discomfort and kind of turns her on (as the ropes brush against her g spot)! The helpless hottie is then groped and spanked without mercy before being dragged off!

Next, Delilah is escorted along with her legs free, but her arms still bound and that crotch-rope still giving her a wedgie feeling she can’t shake. Her mouth remains tapegagged as she is endures being the evil villain’s fondle toy. He plays with her ass, sometimes giving it a spank and squeezes her big boobs. The tape-gag comes off and is replaced with a handgag until a ballgag is shoved in its place. Drool starts to collect around the ballgag almost immediately as she is escorted up the stairs and bent over a railing. Once there the villain moves in behind her and takes her [SIMULATED ONLY] as she bobs up and down and drools even more profusely with each grunt. When he’s done she is again escorted back downstairs, getting groped the whole time until they are at the fireplace. He puts her on her stomach and hogties her nice and tight. Her tits and ass get more attention and then she’s left to struggle, which she does to the best of her very limited ability. By the end, she appears quite spent as the drool collects and drips down her chin. All she can do is hope that she’ll be freed soon since the bad guy has already confiscated the story!

Later, Delilah sits tied up very restrictively with a red ballgag strapped into her mouth. Her ankles are bound to her wrists which are bound to the bed-post, leaving her unable to move. The villain who took her leers at her helpless erotic appeal with a creepy laugh here and a gruff statement of lust there (he’s got some perverted ‘range’ at least!). After watching her for a few minutes he sits down next to her and squeezes her big breasts and rubs her between her legs where the crotch-rope remains tied between her pussy lips. Her ballgag is removed and replaced with a handgag for a stretch before her panties are unceremoniously shoved into her mouth and tape is wrapped around her head like five times. There’s more though as he brandishes the vibrator that was used on her before and straps in-between her legs and then binds her thighs together to make sure it stays in place. Another rope is added around her neck and bound behind to her wrists, leaving her completely without any recourse for escape let alone comfort! After all of this the dastardly villain lets her know that the superintendent wants her gone for good and if she stops her steady stream of orgasms some sort of doomsday device will go off (the wonders and misuses of technology!). Her eyes go wide as she struggles while in the throes of the orgasm inducing vibrator. The villain bids an informal ‘see ya’ and backs out of the room while she can only implore mercy with her eyes. Over the course of many more minutes she is observed from every vantage point and sexy angle replete with the personal space invading closeups and full body viewings. Despite how it all may look, one gets the feeling that this little intrepid investigator isn’t quite done for and will likely escape and take down the superintendent! 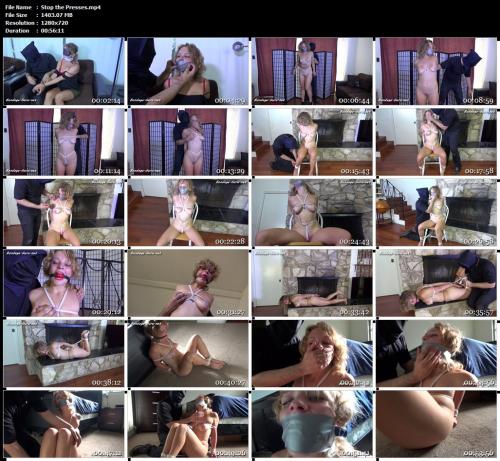