Deep in the Florida swamp is not a place to be. As the song says there is things out here that will make a grown man cry. He lived in the part of the swamp that know one would ever dare go. He was a Gator hunter and kept to himself. He wouldn’t be seen for years at a time. A few miles up the bayou lived a small family with one daughter. Her parents was in town one day and she decided to take the boat out for a ride. She kinda new the swamp but not as well as she thought. She got turned around and everything looked the same. Her boat was low on gas and it was getting dark. The gator hunter heard the boat and went to see why someone was way out here. He hadn’t seen a young women like this in years. She went on by when her boat quit running. She floats up to the shore and ties off to a big tree. She had seen the little house through the trees when she went by. She thought maybe there would be someone there that could help. She makes her way to his property where he was waiting for her in plain site. Camouflaged and sitting by a tree he watches her. As she came around a clump of trees he comes out. Scared out of her mind she falls over. Dressed in little tight shorts and a take top she looked good to him. He kicks and nudges her to bring her around but she just lays there, He slowly walks away to gather his things. He returns to the women and cuts her clothes off. Her ebony skin looked so good. Tying her elbows he neck ropes her. He wakes her up and her eyes widen with fear. He drags her to an old gator cage and ties her off to one of the poles. There is an old filthy mattress laying on the ground. The man brings her a bowl of dirty water and makes her drink. He tells her it is hot down here and you need to drink. He tells her you are out in the middle of nowhere. No one will ever find you out here. Now drink up your going to need your strength for what I have planned. It is almost dark. The man leaves her there to go and get rid of her boat. She walks around in fear in the cage. When he returns the next morning she is a sleep on the old mattress. She hears the leaves crunching as he walks up. It startles her. She see’s him and fears for her life. He enters the cage. She tries to scream out but can’t. He see’s the water bowl and kicks it over. He tells her that bitch I tried to be nice and give you water but you didn’t drink any. He tells her as the day goes on that she will pay for that. He finds an old rag in the cage and shoves it in her mouth. He tapes it in place silencing her. He man handles her and groups her big tits. She is naked and noway to stop him. He has a bunch of old gator lines that he used for his catch. He ties the young girl on the mattress. Smacking her and throwing her around. She cries and pleads through her gag for him to stop. He admires his work and what he had done to her. He hadn’t had a catch like this in years. After a long struggle and her not hydrating herself she lays still in a pile of sweat and tears. The man leaves her there in the hot Florida sun to cook a bit. He returns with a garden hose a short time later. He wanted to wash his prize catch before taking her in to mount her.
Bondage, BDSM, Damsel In Distress, Rope Bondage, Bare Foot, On Screen Gagging, Ebony, Struggle, Pain,Rope, Big Tits, Breast Bondage, Taken, Scared, Caged, Water, Bound Elbows, Crotch Rope, Hogtied, Hogtie, Naked, Sneakers, Camouflaged 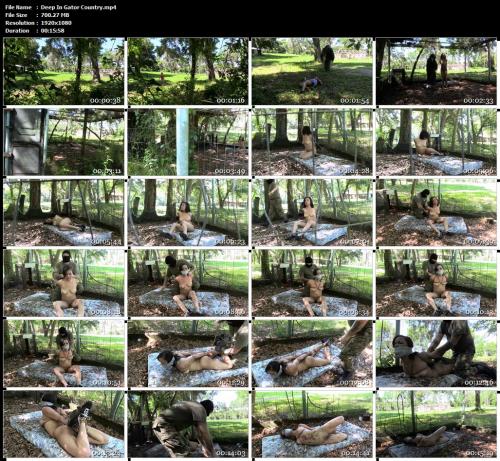 The Man Has Another One – Brendas Bound Bondage Addictions

I bet mom and dad don’t know you let men tie you up! – Monica Jade – Girl Next Door Bondage

If She Would Have Just Sit Down – Brendas Bound Bondage Addictions