One afternoon while lounging outdoors in her bikini, Dakkota daydreams of bondage while looking at risque pictures on her phone. She wonders what it would be like to be be tightly bound and gagged by some mysterious stranger, and soon, her mind begins to picture all the things he might due to her! ball gagged and bound in a bureau, she can barely struggle, the quarters are so confining. Even her poor little toes are mashed inside the small space she’s being kept in. She looks at herself disbelievingly in the mirror on the door, aghast at her plight and how helpless she is. Still, her mind drifts even further until she’s wrapped in yards and yards of rope as she rolls around on the floor, begging for release into the wad of cloth taped into her mouth. Even in her dream, no help will be arriving, and she finds herself hogtied by her fantasy captor and left to struggle! Finally, she snaps her mind back to reality, a satisfied smile on her face as she decides she’ll be making a visit to the hardware store for some rope of her very own! 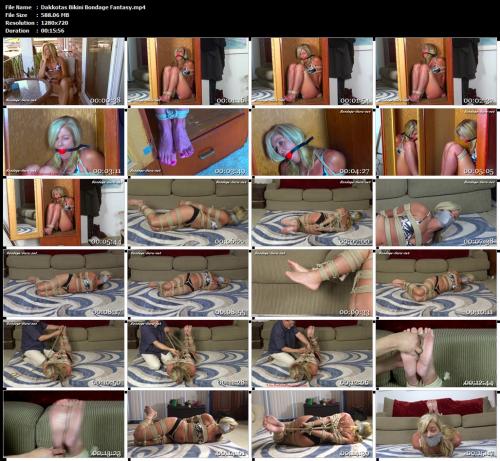