Rachel doesn’t have any idea how she got there. She only knows that she has been stripped to her skimpy panties and dressed in a sheer nude body stocking, her wrists bound behind her and wrenched high into the air. Her mouth was filled and sealed by a panel gag, buckled so tight she thought her head would burst from the pressure. She didn’t have long to worry about her predicament before the man arrived. Slowly, methodically, he began to wind a tight purple medical bandage around her helpless legs! Mewling, the poor girl could do nothing as the medical wrap slowly traveled its way up her body, locking her legs together as Rachel fearfully watched her body disappear beneath the wrappings! They were so tight! As he continued to cover her helpless frame, she felt her breathing become more and more constricted. The man never slowed in his encasement of the poor girl, fusing her arms together in a tight sleeve of the constricting wrap, winding the infernal bandages through her hair, over her mouth, her eyes, eventually sealing her entire head expect for her nose! Unable to stand, unable to see, unable to scream, Rachel could only hand in agony as the cocoon she was locked in tightened around her body with each movement she made. There would be no freedom, despite her efforts and pleas. She would hang there the rest of her days! 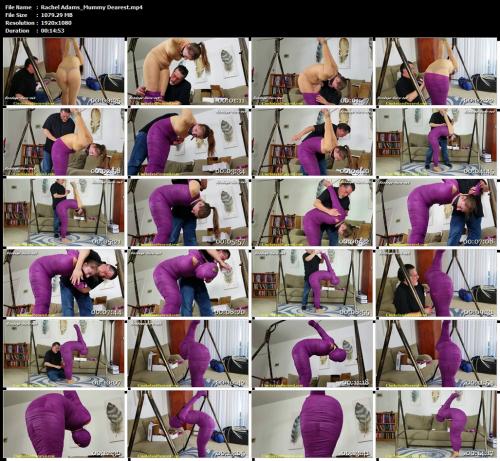