It was housework day for Diamondly, and she was nearly finished with her chores. As the lovely slim blonde made the bed in her bra, panties and nylons, she thought her work day was nearly over, but little did she know her ordeal was just beginning! Out of nowhere, she was grabbed by a stranger who clamped a hand over the struggling girl’s mouth, stifling her screams. Before she knew what had happened, she found herself tightly bound on her bed! She struggled as the stranger crammed a huge wad of stuffing into her pretty mouth, instantly reducing her screams to muffled grunts. The stranger wound micro foam tape around her face again and again; the pressure so severe she thought her head would pop! Now, with the gag firmly sealed in place, she was left to fight against her bonds, calling for help through her packed mouth, thrashing from side to side, her helplessly bound nylon clad feet wiggling impotently. Finally, her roommate returned, and Diamondly tried to warn her about the danger, but her roommate learned first-hand after being roughly grabbed and subdued herself! Now both girls were trapped in bondage, stringently hogtied with their elbows fused together and even their hair tied to their feet! They had no hope of freeing themselves, but they never stopped their struggling, not even when the stranger returned and added to their already brutal gags by tying tight cloth OTM gags over their already packed and sealed mouths! Now the girls knew there would be no hope of freeing themselves. As they struggled, they could only mewl in fear as they wondered what the stranger had planned for them next!! 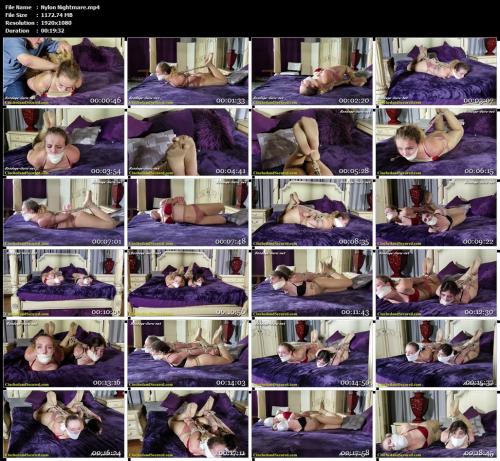 Maid, to be tied up – Bondage: JJ Plush, Born to be Bound

Gigi Lynn – You Work For Me Now – Cinched and Secured

Claire Irons – Get Some Rest – Cinched and Secured