Poor Izzebella! Tied fast to a chair in her very skimpy lingerie that barely preserves her modesty, she’s at the mercy of a man who VERY much wants some information from the ravishing redhead. Had she been smart and simply told him what he wanted to know, she might not be in the fix. But her refusal to talk angered the man, who then decided that if she wouldn’t talk voluntarily, he’d fix it so she wouldn’t be able to talk at all! H subjected her to a series of gags, all designed to keep her silent and miserable, each more brutal and challenging than the last! First, a simple strip of tape plastered across her lips kept her silent and furious. When he ripped the tape from her lips, her yelp convinced him she needed something more effective. The ball gag he stuffed into her mouth did the job, while also serving to further her humiliation by causing her to drool down her chest! Next, he packed her mouth with a HUGE wad of cloth, tied to cloth cleave gags in place to hold it in, and added a cloth OTM gag to finish things off. At least, he was finished for the moment! That was swapped out for an even bigger mouth packing, consisting of a wad of balled up nylons so big she couldn’t close her mouth completely. No problem for the stranger, as the tegaderm clear tape sealed the entire mass in place, no matter how hard she fought to expel it! Next he gagged her with a sponge ball, secured by a vet wrap cleave gag that jacked her jaws apart painfully before the bandages wrapped around her head again and again! The pressure was intense and tears began to form in her eyes, especially after he reinforced the entire thing with bright red electrical tape! Miserably, she tried to signal with her eyes that she wanted the mess removed, and her assailant complied, only to replace it with an even larger ball gag! Her jaws aching, she finally agreed to tell all she knew, only to find her cooperation rewarded by a tight harness gag with an inflatable bladder that was wedged into her mouth! She stared in terror as he pumped the bulb and the rubber mass expanded painfully in her mouth, cutting off her air supply! Her eyes flashing with fear and agony, she moaned in relief when he released the air and the gag shrunk to a more manageable level. Her relief was short lived, for the man now had all he wanted, and it was time to go. Of course, he could not risk her sounding an alarm, so the gag was inflated once again, and the severely muted girl let out a series of plaintive, despairing hums as she tried to call for help! Would anyone ever find her? 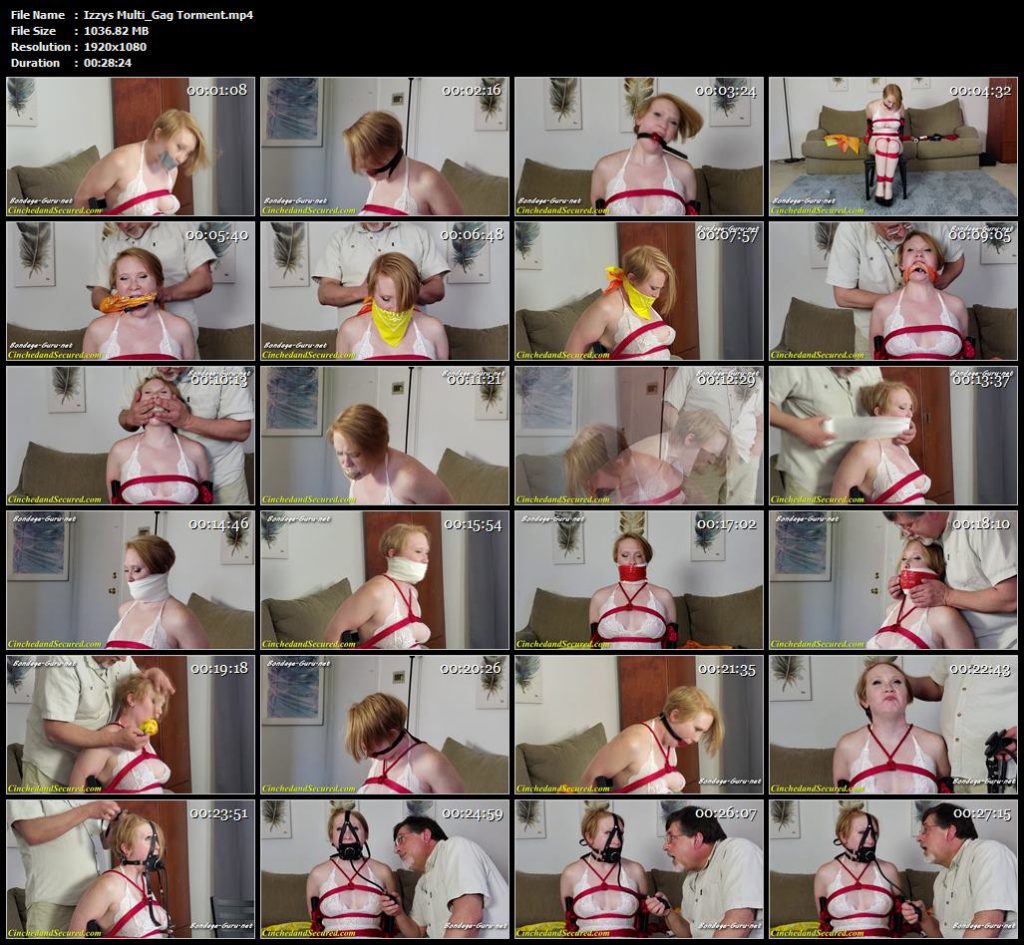 Izzy and the Spiders – Cinched and Secured