Chrissy just arrived home when she is called into the dungeon. Her Master is upset that she has not been behaving and has been wearing very revealing clothing around. She’s being a brat so he slaps her across the face to put her in her place then orders her to place her hands on her head, elbows wide and legs spread. He begins to tease her bare stomach and inspect her body. He decides that today she is going to be tied up for her punishment. He binds her wrists together in front with rope as she looks worried about what’s coming next. He ties her arms over head and raises her up until she is on her tip toes. Then he ties her ankles together and takes her sneakers off so her toes can barely reach the ground! He continues to tease her stretched body, pulling down her jeans to expose her g-string and lifting her crop top to expose her breasts. He proceeds to give her a hard spanking until her ass is evenly red, then he leaves her there while he prepares the next part of punishment!

Chrissy is now wearing just a g-string and her Master has taken her down from the arms over head position. She is now bound in a type of backbend bondage position with her legs spread and arms stretched straight overhead. He comes in and starts to tease her in her vulnerable position. He finds that she can still move a little too much so he tightens the ropes so that she is stretched so tight she can barely struggle at all! Then he brings out an instrument she hasn’t seen before, the Wartenberg wheel, and teases her by running the sharp edge along her tummy, breasts, thighs and pussy. She squirms in reaction but has no chance of escape! Then he brings out some ice, torturing her with it all over her body until it is wet and glistening from the melted ice! He pulls down her g-string but it’s still in the way, so he decides to just cut it off! He gags her with her panties for added humiliation. Now fully nude and exposed he continues to tease her lower abs and pelvic area and gives her a good pussy slapping! He leaves her helplessly bound and panty gagged. She thinks she is done when suddenly she hears the hitachi click on. Chrissy knows what’s coming next as the scene fades out! 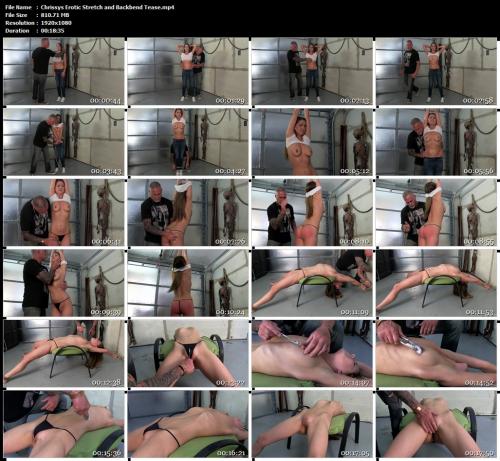