Chrissy is tied up and challenged to escape in this fun and playful unscripted video. She is barefoot and wearing super short denim shorts and pink crop top. She gets tied up on screen and is expecting a simple and easy challenge. That’s why she is surprised when he ties her elbows together very tightly too! Apparently this escape challenge is not going to be as easy as she thought it would be! She is still confident she can get free as she begins to struggle determinately against the tight ropes. The wrist knots are completely out of reach so all she can do is struggle against the ropes in an attempt to loosen them. It takes quite a while but eventually she manages to get her hands free, however by this point her arms are already starting to go numb from the strict elbow tie! She manages to untie her legs with her elbows still bound which proves to be another difficult task. Then she starts walking around looking for anything that could possibly help her get free from the elbow tie, talking about her situation throughout the entire ordeal. Will she manage to escape from the rope pinning her elbows together, or will she be forced to admit defeat? 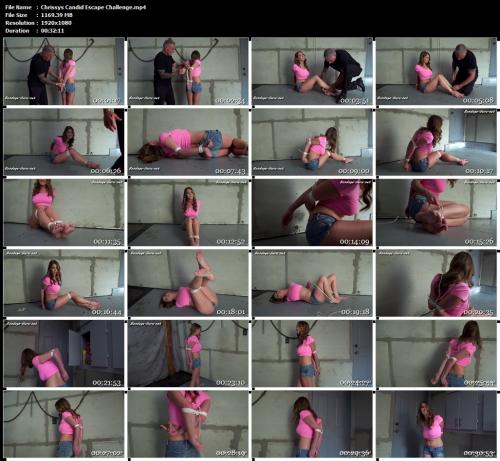