Chrissy and Terra thought they were just showing up for a regular glamour photoshoot, but little did they know they were about to find themselves in the presence of the pervy photographer! Most models have encountered one or two in their careers, but this guy is a pro at manipulating models so that he can get the money shots that he needs! He knew the girls would be dehydrated from hot summer day so when they arrive he offers them both a small cup of water. Luckily for him, Chrissy and Terra make it far too easy, gulping down the water before asking any questions. They will soon realize that it wasn’t just plain water! Terra finished her water first and starts to feel dizzy, and Chrissy gets concerned, asking her if she is okay, but she can’t help her friend out for long before she too starts to feel strange. Their upper bodies begin to sway just a little side to side and their eyes start to flutter and before long the two girls helplessly give in to the powerful effects of what he slipped to them. Two beautiful models lying limp on his bed, so much better than the one at a time he is used to!

He check both girls eyes and limbs to make sure they’re really out, then gets right to work manipulating their limp limbs and floppy bodies out of their tight dresses and sexy high heels, leaving them topless and barefoot in just their tiny black thongs. The fun is just getting started, this time he doesn’t just want to take photos of them naked, he wants to get pictures of them tied up and tape gagged too! Unsure how long this formula will keep them subdued, he quickly ties up their limp wrists and bare feet and puts strips of duct tape over each of their mouths while they’re still out. Just as he is about to get out his camera to take photos he gets phone call. He tells them he is very busy at the moment, but apparently he cannot get out it and has to leave! Chrissy Marie and Terra Mizu are left tied up topless on the bed. Not long after he leaves they begin to wake up, at first very groggy and confused, but quickly realize their dresses and heels are gone and they are bound up with rope and gagged! They desperately struggle and gag talk to each other, trying to escape their perilous predicament before the pervy photographer returns! 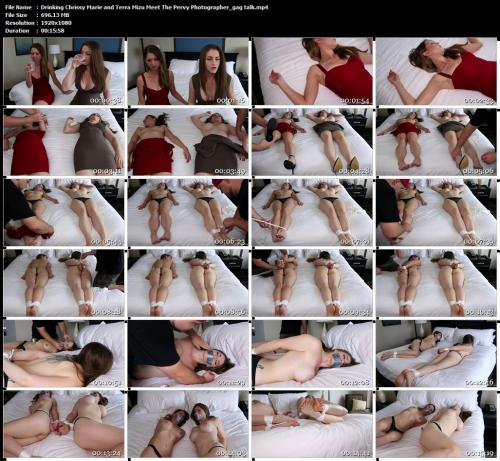