Gorgeous buxom trooper Chrissy is a soldier in an army with a very sexy dress-code (pants are optional apparently)! In the midst of the last battle, she somehow finds herself lost behind enemy lines. The barren landscape doesn’t offer much cover either, but she’s a survivor and looks ready to get back to her unit. Beyond her line of sight lurks another type of military “asset” a creeper who looks for any enemy stragglers. Being something of a chauvinist, he has different means of dealing with hot female soldiers and looks a bit more excited than he needs to be when he sees beautiful Chrissy. She stands next to a building and ponders her next move when he abruptly pounces on her, handgagging and ‘smothering’ her into ‘submission’! Subsequently, after some time has passed, Chrissy finds herself tied up with rope to a pole. A rather invasive crotch-rope anchors her along with arms bound tightly (including her elbows being tied together). Despite her obvious charm, she isn’t able to talk her way out of this predicament. Her captor shushes her when she tries to yell for help and ultimately stuffs her mouth and wraparound tapegags her. He “incidentally” gropes her big tits, much to her chagrin, before leaving her in the hot sun. Clearly, her positioning is awkward and hard for her to deal with, especially with high heels on! Still she takes it like the resilient babe she is. Her perverted captor comes back and feels the urge to check her out a little more closely and pushes her top up to reveal a pair of luscious all-natural boobs ripe for the fondling. He takes full advantage and feels her up before again leaving to languish. Every single sexy inch of her helpless form is examined, both in closeup and in full body positioning. Her battlefield adversary returns to give her some bad news, his commander wants to see her and he doesn’t really care in what condition she’s in! Thus, she is untied just enough so that she can walk, but remains tightly bound and gagged as she is led off via a collar and leash. Looks like she’s going to have to get used to being in bondage, at least until a prisoner exchange is arranged and who knows when that’ll be! 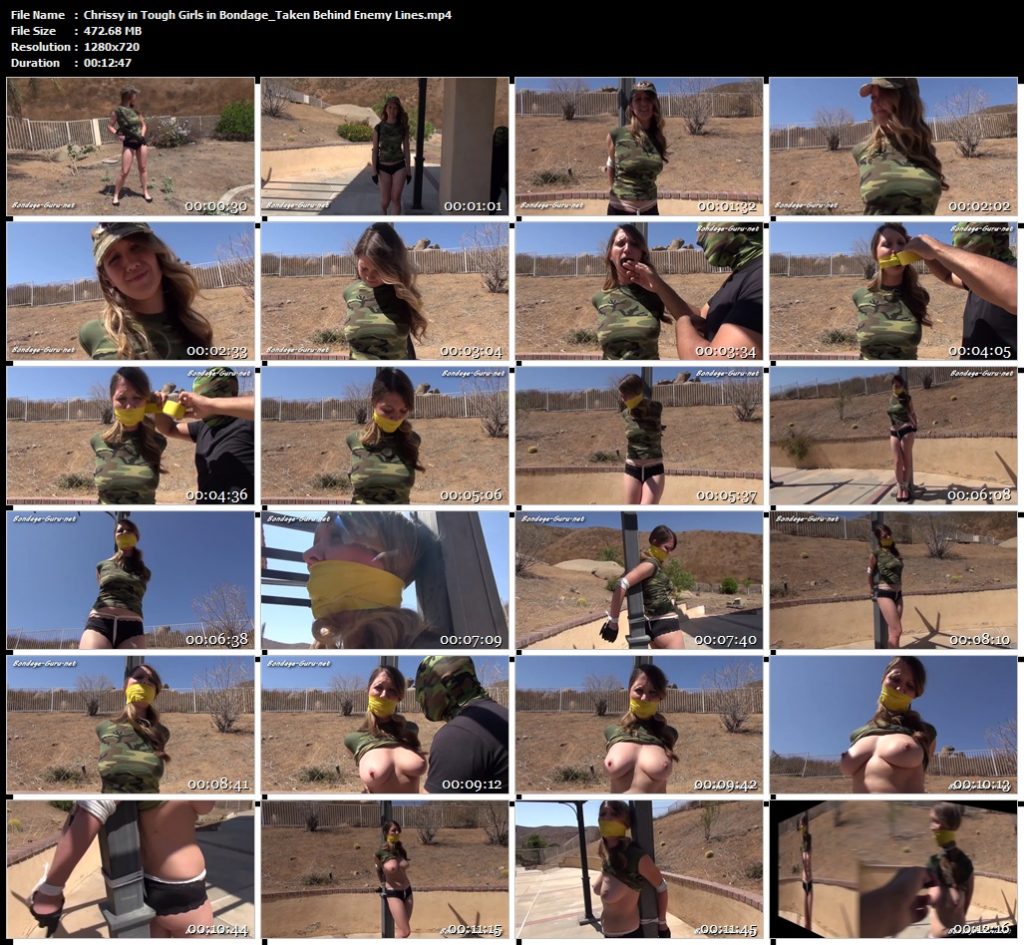