Chrissy is being held captive in cold, creepy dungeon space. Leather cuffs are locked around wrists and ankles and chains secure her into a stretched out spread eagle position on the dungeon floor. The pillow under her back may look as though it makes her more comfortable but being imprisoned in the strict backbend predicament for hours takes it toll as she struggles against the unforgiving restraints. Soon the bad man returns with some sinister plans in store for the helplessly bound captive. He gropes her naked body all over as she squirms and pleads with him through her gag to let her go. Then he attaches clover clamps to her nipples and torments her by pulling on the chain. Next comes the flogger which he uses to flog her exposed pussy. Just when she thinks she can’t take anymore torture he gets a little more personal and starts slapping her pussy hard and repeatedly with his hand. Her body tries to recoil from the pain but she is stretched out too tight to get away! Then he starts rubbing her pussy, causing her to whimper at the indignity of the fact that she’s starting to like it. She just can’t help it! Soon her whimpers turn to gagged moans and he can tell she is reacting well to the pleasurable sensations. So he takes out a hitachi and dangles it over her so it just barely grazes her pussy, teasing her with it and making her want more. After doing that for a while he presses it firmly into her shaved snatch and before long she screams “I’m cumming” through her gag as the intense orgasm sends waves of pleasure through her body. But once the orgasm subsides it’s back to being tortured when he continues to hold the vibrator against her sensitive clit as she begs him through her gag to please stop! Eventually he does but not until he has had his fun! He leaves her there still bound and gagged while he figures out what he wants to do with his helpless captive next! 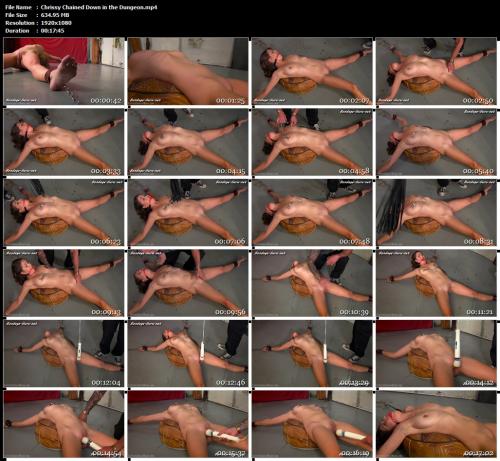