Chrissy and Kristall are getting ready to go out to a new club they got an exclusive invite to. They are talking about all the fun they plan to have when Kristall asks who should be the designated driver. Chrissy tells her not to worry about that, the guy who invited them said that he would send a private limo for them! Kristall doesn’t seem as happy as Chrissy thought she would be. She asks Chrissy if she gave this strange man their address, and Chrissy confirms that she did. She starts telling Chrissy how that wasn’t a good idea and Chrissy tries to assure her that the guy is safe and legit. Just as Chrissy says, “besides, what’s the worst that could happen anyway.” they hear a strange noise from downstairs. They are both a little freaked out and try to convince one another to go see what is was, eventually agreeing to go together.

They cautiously come around the corner to the main room to see no one around and they think the coast is clear. Just then the intruder sneaks up behind them and manages to quickly grab and hand gag them both at the same time! He threatens them into cooperating then orders Chrissy to tape Kristall’s mouth shut with strips of duct tape. Chrissy at first refuses since she doesn’t want to hurt her friend, but he threatens her again and they decide they should just do whatever he says so that he won’t hurt them! Next he tells Chrissy to tape her friend’s wrists, ankles and thighs as he keeps a close watch on them. Once Kristall is bound and gagged to his approval, he orders Chrissy to now take the duct tape and gag herself with it! Then it’s her turn to get taped up and she gets it even tighter than her friend Kristall as he knows she is going to be a troublemaker! Now it’s time to check out the goods! He strips them topless and forces them to get close to each other for photos. They are at first confused when the man tells them that he plans to sell them to the highest bidder, but their eyes widen with panic when they realize what exactly that means! Before he leaves to arrange for their travel he puts them both into tight taped hogties, just to make sure they really won’t be going anywhere while he is away! They are left helplessly squirming on the ground and desperately struggling to escape before he returns!

The girls gag talk frantically to each other trying to figure out a plan and Kristall is obviously angry that Chrissy got them into this mess in the first place! After a couple minutes they both realize that if they struggle and pull hard enough they can break free from their hogties which gives them hope that they can get free, but the rest of the tape binding their wrists and legs together proves much more difficult to escape from! After what seems like an eternity of wiggling and writhing around in an effort to loosen the sticky tape, Kristall manages to get her hands free, but unfortunately for these two friends their time is up. Kristall tries to get the tape off Chrissy’s wrists as quick as possible but it’s too late and the man returns just in time to catch them in the act! It’s time for a ride in his van, but first it looks like someone needs more tape! 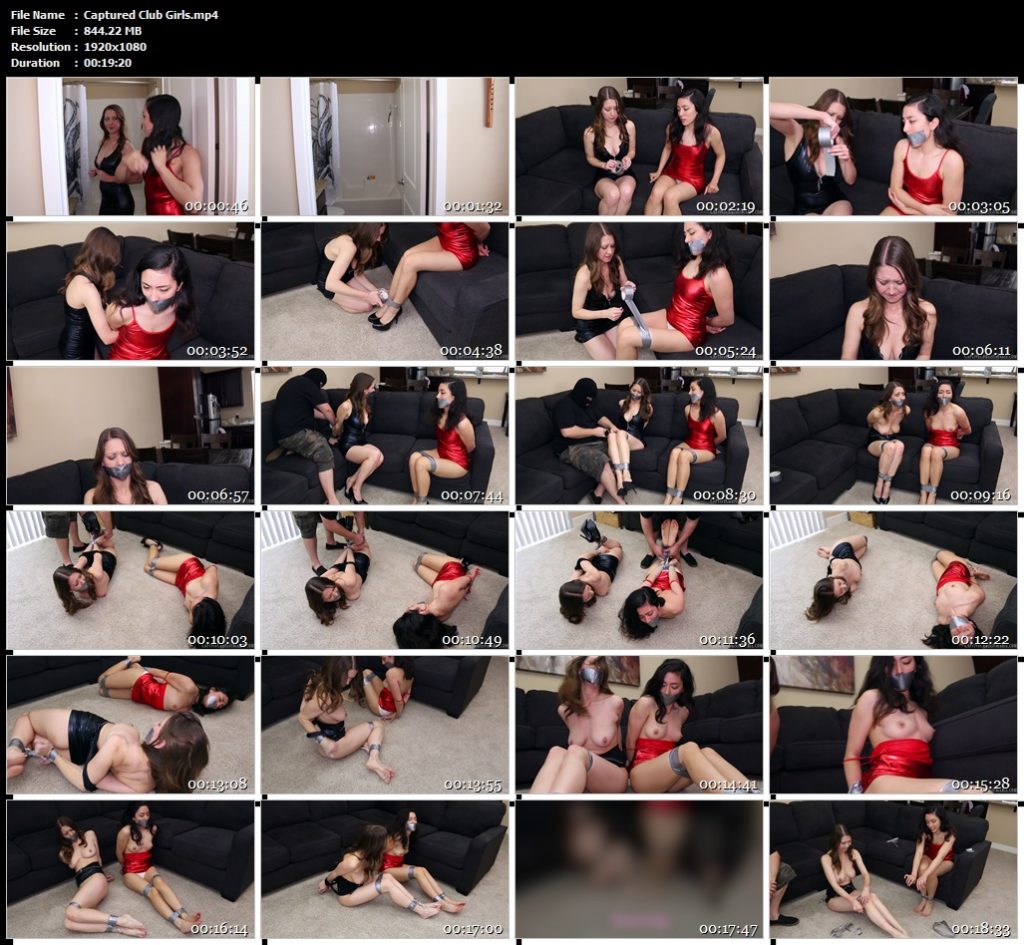