The first mission for the rookie agent Kelevra looked quite simple. She had to escort Jessica – a former criminal gang member who decided to collaborate with police- to a secure location where her former accomplices couldn’t find her. Kelevra has to take Jessica to her house to collect some of her personal effects before moving to the next location.

When the clip starts Jessica and Kelevra has just entered in the house. Jessica who has the ends bound with zip ties asks Kelevra to go to the bathroom and Kelevra allows her but doesnt unzip her hands lest she plays some trick. Once in the bathroom Jessica tries to get something to cut zip ties and she finds a pair of scissors. Cutting the zip ties it’s an easy task for our veteran criminal. Once free, Jessica grabs a towel planning to use it against the agent. Kelevra in the meantime starts wondering what Jessica is doing in the bathroom and opens the door. Jessica takes her chance and throws the towel on Kelevra’s head, then puts an arm around her neck, ‘smothers’ her and in the end she makes her faint. Not finding rope or other means to tie up the agent, Jessica cuts some strips of cotton from a bed sheet and uses them to tie up Kelevra’s wrists and ankles. Another strip of cotton is used to cleave gag the agent. Once Jessica finished tying Kelevra she follows her plan. Before being captured she had hidden part of the booty of the gang in the garden. Now she goes to recover it put it the car and escape beyond border. So she grabs the keys from the agent’s pocket and goes out to recover the booty.

After some minutes Kelevra wakes up and realizes that she’s immobilized and silenced. The way Jessica played with her made our rookie agent sigh for frustration. After some minutes of moans and screams Kelevra finds some spirit and tries to find some tools to untie herself. She opens a drawer and starts searching in it when a masked man presses a cloth poured with in her mouth. For the second time in few minutes our unlucky rookie is knocked out. Few minutes later Jessica comes back. She can’t start the car’s engine with the keys that she’s found in Kelevra’s jacket so she starts searching for the right key. She has no time for that because the masked man comes from behind and put her to rest in company with Kelevra.

Later the two women are awake but totally immobilized. The man has not spared rope to bind them (wrists, legs, ankles and chest harness). The guy is one of the former Jessica’s accomplices and wants to recover the booty that she has hidden. Under the threat of being immediately Jessica confesses where the valuables can be found. Then she and Kelevra are tape gagged and left alone for some minutes. They struggle but can’t get out of the binds. The masked criminal comes back, happy that he has found what he was looking for. As a last reward he sets a gas trap for the two women opening the gas hob, and then he leaves. Jessica and Kelevra struggle frantically, each other trying to unbind the knots holding the other. Will they free each other before the gas makes his work?

This clip is a custom request and was acted in English language. It’s also the debuting clip of Kelevra. 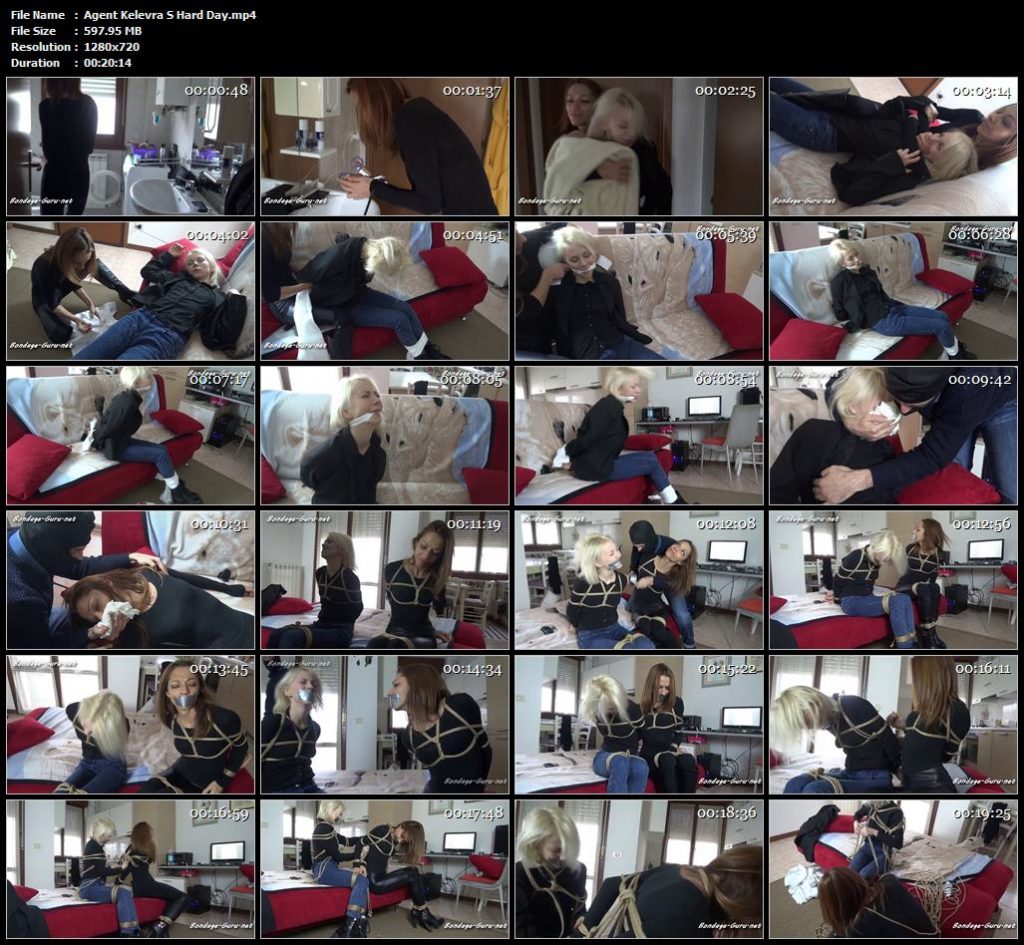