Chrissy is a princess who is visiting the USA. She is wearing a black velvet dress and white bra and panties. A man has been following her and has a plan to hold her hostage for a ransom. We see her walking in the corridor when suddenly a man grabs her from behind and puts a white scarf over her nose and mouth and wraps it around her head then drags her into the bedroom. Once inside we see Princess Chrissy standing in the corner of the room as he takes some pictures of her gagged. “These are for your precious dad, I think he will pay a lot of money for your freedom” he tells her. Then he removes the scarf and Chrissy is afraid and pleading for him not to hurt her. He tells her to be quiet and he won’t hurt her. She just has to wait for her father to pay the ransom and in the meantime they will spend some good times together. He takes a roll of silver duct tape, tears one long piece and puts it over her mouth then orders her to take off her dress. She protests with a Mmmmppphh! And he threatens her and tells her to do it or else! So Chrissy reluctantly removes her dress. Then the man makes her to lay down on the bed next to him.

Later during the night Princess Chrissy is awake and the man is napping. She removes her gag. She looks in her purse on the floor to take her phone, but before she can get away the man wakes up. Oh no you don’t! he says as clamps a white rag over her mouth and nose. She tries to struggle but she can’t break free and her eyes start to roll and flutter before she falls limp in his arms. Now we see the man walking with Chrissy still resting over his shoulder. He walks into the living room lays her on a sofa. Then he puts a long piece of black duct tape over her mouth. She starts to wake up and he tells her that her father agreed to pay him the ransom and he will have to leave her there tied up and gagged while he goes to collect it. He ties her hands behind her back and her ankles are bound then leaves to collect the money. Princess Chrissy struggles and wiggles on the sofa, with a lot of mmmpphh-ing, then starts to jump around the room to try and get out of the door but it’s apparently locked from the outside! She hops back to the sofa and continues to struggle helplessly hoping that someone will come to free her soon. 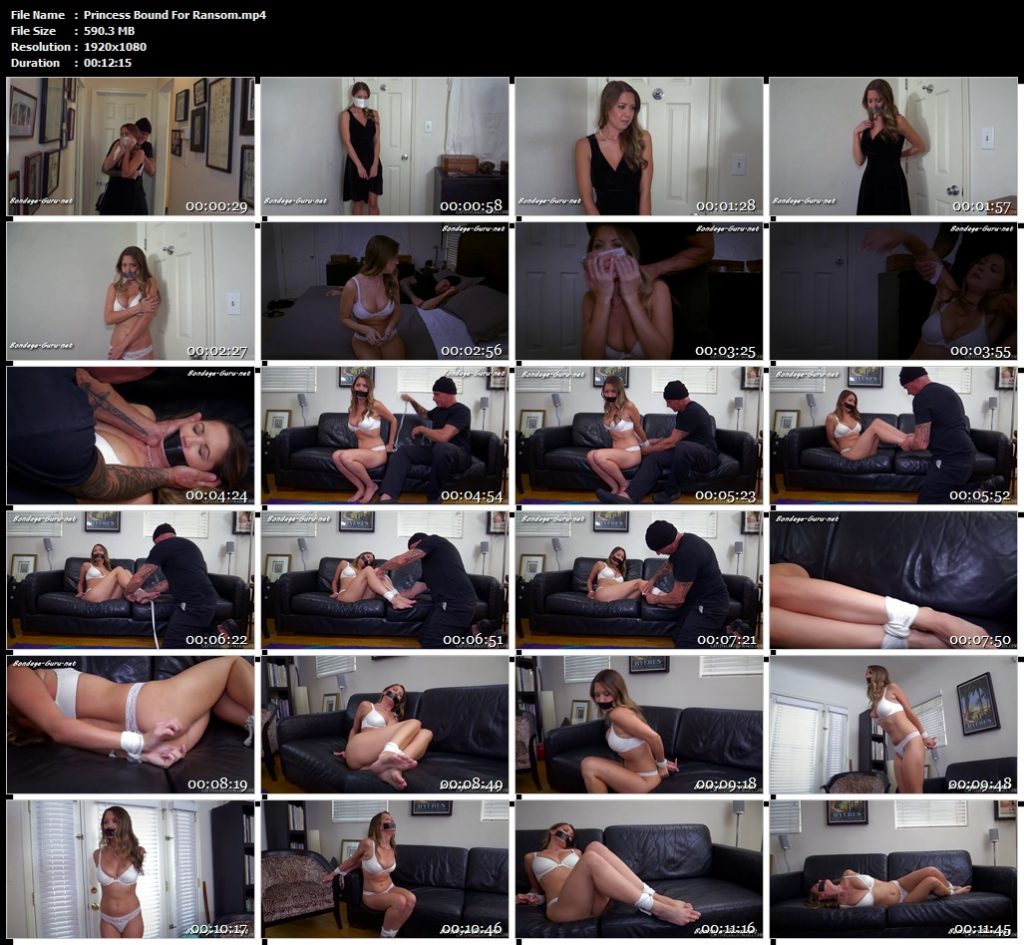