Chrissy hired a private investigator to find out where her husband has been sneaking off to and spending all his time. It didn’t take long for the PI to follow her husband to storage unit and find out. Today the PI brings Chrissy to the storage unit and tells her what’s been going on. Chrissy is shocked to see that the room is filled with all sorts of bondage gear; rope, gags, whips and the like. She even finds a pair of panties which she tells him are not her panties! He must have been bringing other women there and tying them up! She can’t believe the son of the bitch! Then the PI proceeds to tell her that he also found out that her husband lied about the business trip he was supposedly taking to Denver that week. Turns out he actually went to Las Vegas instead, and he didn’t go alone. He took his secretary with him. Chrissy is fuming now that she knows her husband has been cheating on her and she vows to get her revenge. She tells the PI she has an idea and maybe he could help her out by tying her up and taking pictures of her to send to her husband. Then he will realize that he has been caught when he sees his wife bound and gagged with all his gear in his personal dungeon space! The PI hesitates telling her he has never really tied anyone up before but ultimately agrees to help her out. He starts tying her up with rope as Chrissy vents about knowing that her husband was up to no good and that she is going to make him pay. She can’t believe he never told her he was into this stuff in the first place! If he would have asked he would have found out that she has wanted to try bondage for a long time too! Instead he has been sneaking around and tying up other women! After her wrists and ankles are bound Chrissy tells the PI that he should gag her too. So the PI finds something to gag her with. Chrissy isn’t too happy though when he stuffs the panties that weren’t hers in her mouth! He uses a white cloth to cleave gag her packed mouth. Then he ties her legs and proceeds to take a few pictures of her as Chrissy struggles and mmmpphs through her gag. It appears like she isn’t very happy and might even be in distress. He is confused because this was all her idea to begin with. After a couple minutes he assumes that she wants out and removes her gag. She asks him “what are you doing?” and he tells her it seemed like she didn’t like it. Chrissy tells him it was just all part of the game and she was acting like she didn’t like it to make it seem more realistic. She tells him it’s okay that they can keep going. He doesn’t hesitate and stuffs another pair of panties he found in her mouth to gag her again, this time sealing them in with micro foam tape between her teeth and wrapped around her head several times! The truth is it isn’t his first time tying someone up and if she wants realistic bondage then he will give it to her! He proceeds to tie her elbows together behind her back then chicken wings her arms! Chrissy’s eyes widen as she realizes maybe she should have ended this while she had the chance! Then to her horror he takes yet another pair of someone else’s panties and ties them over her head! He undoes her thigh rope and uses it to crotch rope her and pull her into a strict cross legged hogtie! Chrissy is really not into this anymore but the PI can’t understand anything she is saying with that gag in her mouth! He just keeps taking photos of her as she struggles helplessly in the extreme bondage, even going as far to expose her breasts and she mmmpphhs in protest! He doesn’t seem to be getting the hint that she is in real distress now. Chrissy really got in a over her head in her attempt to get revenge on her cheating husband! 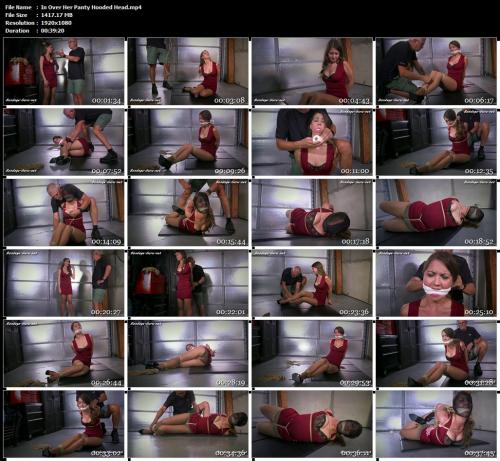