Ms Knotts has caught these guys in her hotel room during a school out of town function. They were there to steal her panties as part of a fraternity initiation. But Jamie is not very amused and she is telling them that she will be turning them in. Of course, they cannot let her do this. So, in a short while Jamie finds herself tied up. When she refuses to stop complaining, a pair of those stolen panties are shoved in her mouth and taped in to gag her. Things go from bad to worse when Jamie finds herself struggling bound and gagged with her clothing in disarray. Her blouse has worked its way open and her skirt has risen up her thighs. These guys know they are in big trouble, so they may as well make it worth it. They pull Jamie’s bra down to expose her big boobs. Later, Jamie finds herself alone when someone walks in the door. It is her boyfriend who also happens to be the Dean. 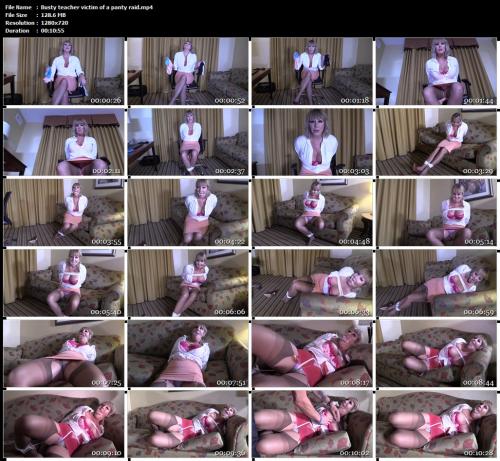 I let you tie me up! Now don’t you dare tell your dad you caught me fucking the neighbor! – Girl Next Door Bondage