Chrissy Marie is a popular ‘vlogger’ and is filming an extra special update for her subscribers today! She has agreed to do some dares sent in by her followers but she definitely wasn’t expecting this! The dare is that she has to strip completely naked, tie herself up and then wait for her housemate to find her. Chrissy will never turn down a challenge so she agrees to do the dare! She begins by stripping naked out of her tight jeans and tank top then proceeds to gag herself with a large red ball gag! Then she clamps her nipples with clothespins which keep them nice and perky the entire video! Chrissy attempts to keep talking but it’s hard to tell what she is saying with that big ball in her mouth! She pulls out some white rope as she gets ready to tie herself up!

Next we see Chrissy lying on her back on the floor. Her legs are now frog tied and also bound to opposite ends of the couch to ensure that they remain spread! She also has a very tight crotch rope and her wrists are tied down to her thighs. She struggles a little to test her bonds and realizes she managed to get herself into a bit of a predicament! Guess there is nothing she can do now but wait for her housemate to come home. She seems to enjoy the situation, especially thanks to the tight rope rubbing up against her pussy as she struggles! Needless to say her housemate finds quite the surprise when he returns home! But Chrissy wasn’t expecting what happens next. Her housemate brings out a riding crop she didn’t even know he had! She squirms helplessly as he teases her with the crop before using it on her pussy, thighs, belly and breasts! For several minutes he dominates his helpless housemate! At the end she tries to beg him to untie her but he can’t really understand what she is trying to say. He just assumes if she got herself into the bondage that she can get herself out, but that certainly is not the case! He goes upstairs leaving Chrissy hopelessly struggling to escape! 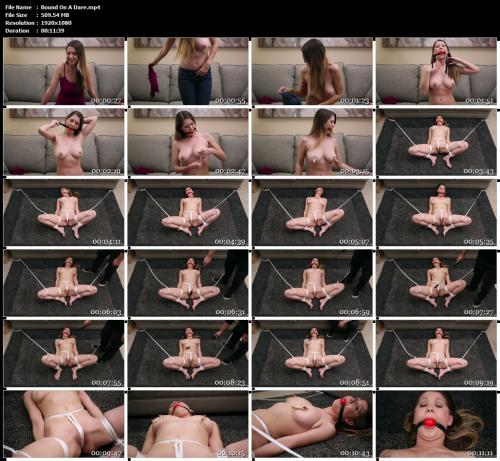