Chrissy arrives home from work not realizing that there is a big surprise there waiting for her! As she walks in a man jumps out and grabs her, holding a white cloth over her mouth and nose as she struggles to break free from his grasp, but he easily overpowers her and her body slowly goes limp in his arms. He has been stalking her for some time and plans to have his way with her. He drags her over to the couch and starts to play with her and fondle the sleeping beauty. In the process he removes her satin blouse, high heels and skirt, leaving her in nothing but her black nylons. Then it’s time to restrain her before she wakes up! (Off screen tying). When she comes to she is groggy and confused but becomes horrified when she discovers she is tightly bound in rope and the gag in her mouth muffles her cries for help! She desperately tries to escape, but is ultimately unsuccessful. All she can do is just struggle and mmmpphh helplessly, worrying that the man who did this to her is still in her house and scared about what he could be planning to do with her next! 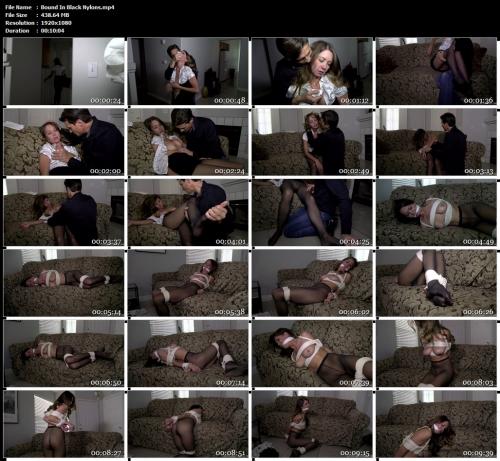