The Hunter carries pretty Dacey over his shoulder into the living room with her hands tied behind her back and a big red ball gag jammed between her teeth. Dacey’s booted legs flail and kick in the air and begs through her gag as she is carried in. But the Hunter has had enough of this brat, time to put her in a little time out, he lowers her to the floor and sits on the sofa then drags her onto his lap. He tells her that being a brat will cost her this time. He grabs her feet and wraps ropes around her booted ankles and ties them tightly together. Dacey struggles helplessly on the sofa as she watches her ankles being tightly bound. The Hunter pulls her back up in his lap and looks at his bratty captive, but Dacey snorts into her gag unrepentant, so he get up and gets more rope. Dacey struggles her legs off the sofa and kneels on the floor pulling desperately at the ropes binding her wrists, but there is no hope of escape. The Hunter comes back with more rope and wraps the rope around her upper arms then pulls the ropes tight. Dacey grunts and groans as he elbows are pulled together behind her back, the tight ropes bite deep into the soft flesh around her biceps. He cinches her elbows together then pushes her to the floor on her belly, He grabs her booted ankles and bends her legs so her stiletto heels are by her hands. A rope is run from her bound elbows down between her stiletto heels then pulled tight. Dacey yelps and moans into her gag as she is brutally hogtied. Once the Hunter has her in the tight hogtie he pulls her up onto her knee points and balances her next to the sofa with her feet braced against the side of the sofa. Dacey’s eyes go wild in terror as she tries to maintain her balance on her knee points, she feels like she is going to fall forward on her face at any second and begs and pleads with the Hunter to please let her down. He tells her that he is going to leave her alone in the tight hogtie until she learns to behave. Dacey sobs and cries through her gag dreading being left so tightly bound, gagged and helpless for who knows how long. He lowers her to the floor and leaves her alone in her ropes to contemplate her attitude. 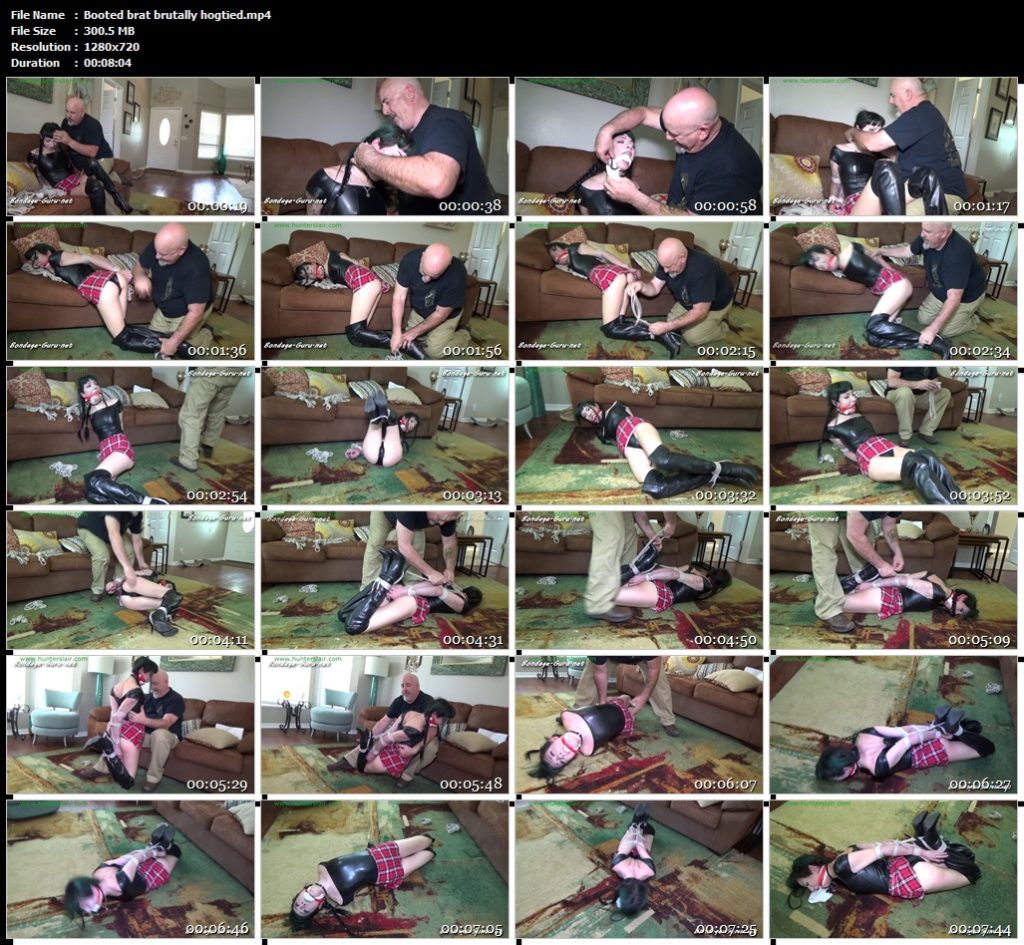 Maisie & Katie in: They Thought It Would Be Fun To Explore the House On Macdemia Street… (Full Clip) – Borderland Bound

Abby vs. A Worthy Effort