Part 1 – Lorelei is ballgagged onscreen and then left alone to squirm on the steps. She’s been roped up wearing a short-skirted business suit with blazer and blouse, backseamed stockings, and high heels.
Part 2 – Lorelei has been tied facing the kitchen post, with her stocking’s backseams on display. She’s now muffled with a tapegag. She mmphs and struggles against the ropes.
Part 3 – Lorelei’s now secured to the kitchen post, standing one-legged in her high heels. Her arms have been pulled back strappado-style and tied behind the post. Her breasts are exposed and on display. She’s obviously very uncomfortable. She writhes and whimpers, but can’t escape her predicament.
Behind The Scenes – The feature is followed by outtakes of fun moments and lots of laughter.
Ballgag wielder: Jon Woods. Multiple cameras mixing tripod and handheld video verite’ footage. Our Pana cam did a great job with the color balance while the older camera didn’t, but I decided to use all the footage anyway, because it looked interesting! 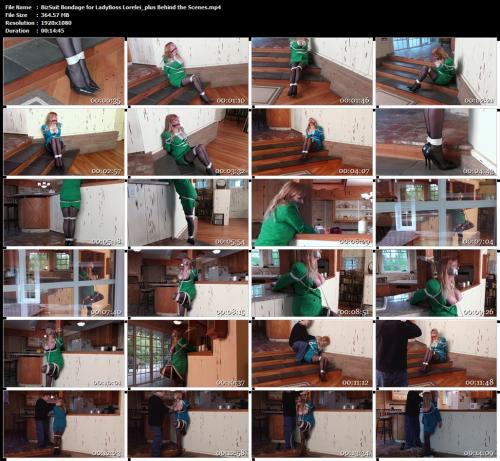