Chrissy is lounging in her string bikini top and short shorts, but unfortunately her plans to spend a relaxing day by the pool are cut short when a masked man breaks in to capture the bikini clad babe for himself! He handgags her tightly before she has a chance to scream and tells her to be quiet and cooperate with him and she won’t get hurt! Then he starts to tie her up as she begs him to leave her alone and take anything he wants! Then he tells her that what he really wants is her! With her wrists now tightly secured behind her back he takes a long white cloth and gags her with it between her teeth, effectively cleave gagging her so that no one can hear her distressed cries for help! He continues to quickly tie her, binding her legs together and adding more rope around her arms and chest! He hogties her and leaves her struggling on the couch while he goes to pull his van around!

Chrissy desperately tries to escape before the masked man returns takes her away! However after a couple minutes she realizes there is no chance that she will struggle free from the ropes in time before he returns! Her only hope is to try and get outside and get a neighbors attention. So she squirms her way off of the couch and struggles across the room, slowly inching closer to the door, but she is hogtied so tight that she can’t make it there before the masked man returns! He teases her for her pathetic escape attempt then scoops her up and carries her away, transporting her to his lair where she will be subject to even more bondage torture! 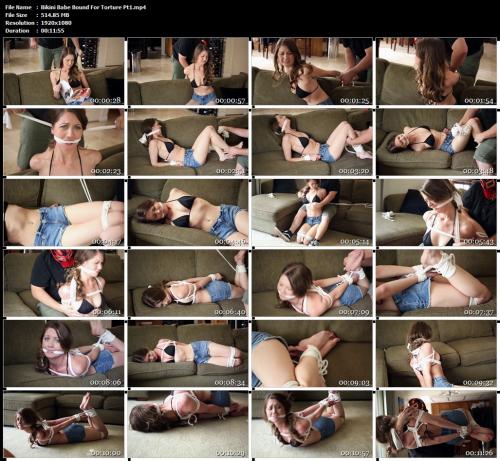