Now this steampunk-themed bondage fantasy is bargain priced! As our tale opens, Airship Pirate Captain Charity O’Malley (Lauren Kiley in corset, frilly panties, lacy fingerless gloves, stockings, and boots) has been taken captive by the scoundrel Bike. She’s suspended and cleavegagged with a powerful vibrator tightly strapped between her legs. Her dastardly captor knows he must break her will so she’ll surrender a rare and valuable element to him. The curly-haired damsel twists and jerks against the ropes when the vibrator is activated, but ultimately surrenders to a helpless, flying orgasm. Will the villain succeed with his fiendish scheme? At a seedy tavern, the villain Bike is approached by a gorgeous lady (Kalina Ryu) who claims to be Empress Octavia. The mysterious lady takes him back to the Empress’ mansion, where she instructs the wary villain to bind and gag her. Once she’s helpless, the lady (in a satiny outfit, boots, lacy blouse and gloves) begins an other-worldly meditation, but it’s soon interrupted by Bike. He uses unusual methods to interrogate the trussed-up beauty, and she reveals she’s actually an extraterrestrial! When his questioning is completed, the skeptical villain regags his stunning captive and leaves her alone to futilely strain against her bindings while he ransacks her alien belongings. Professor Blackstone Emerson Claw III is still holding temporal agent Rachel Adams captive at his mansion. Taken from her cell, the plucky damsel (dressed in a white blouse, a long skirt, corset, stockings and boots) is chairtied in his study. The criminal mastermind states his admiration for Agent Adams’ fortitude after resisting his attempts to pry information from her for so long. But when Rachel again refuses to divulge her secrets, Professor Claw gags her and leaves. The luckless time-traveller struggles valiantly to free herself, but her efforts are all in vain. Then Bike appears, disguised as one of the Professor’s monk servants. He stuffs the bound and gagged captive into a trunk and spirits her away. Professor Claw mistakenly believes Agent Adams has freed herself and escaped, and decides he must hone his tying skills. He hires a woman of questionable virtue for practice; but “La Paloma” is waylaid by government operative Britney Amber, who takes her place for the job. Britney is taken aback when the Professor tells her he intends to bind and gag her, but she must play along. The busty beauty (stripped down to her corset, gloves, panties, stockings and boots) is cleavegagged and thoroughly bound (all shown completely on screen), but the sexy spy just can’t wiggle out her bondage. Agent Rachel Adams is spirited to one of Bike’s secret hideaways, where our damsel is bound spreadeagle on the bed in a long corset with a skirt, stockings, boots and long gloves. Bike demands that the time-traveller tell him all she knows about extraterrestrials, but Rachel denies him any information. Bike gags Rachel and leaves her to struggle alone. At Professor Claw’s mansion, Britney is caught snooping around. She explains her actions as innocent curiosity, but as her host ties her up a second time, he questions whether or not Britney is actually “La Paloma.” The Professor doesn’t believe her explanation, and the busty spy (in a soft corset, panties gloves, stockings and boots) is securely hogtied and ballgagged (all shown completely on screen), desperately trying to escape her failed mission. Rachel Adams remains Bike’s captive. The temporal agent (still in a long corset with skirt, stockings and boots) is ballgagged and laced into a snug leather single-sleeve. Bike tells her he has other business to attend, and he leaves the helpless damsel alone. Rachel uses this opportunity and tries her best to free herself from the inescapable bondage, but it’s clear she’ll remain Bike’s prisoner as long as her despicable host wants. At Professor Claw’s mansion, Britney Amber (in a soft corset, panties and frill-topped stockings) is interrogated by the dark master criminal. She tries to explain herself, but she’s cleavegagged and the vibrator secured between her thighs is activated, compelling the secured spy to experience an inescapable orgasm. 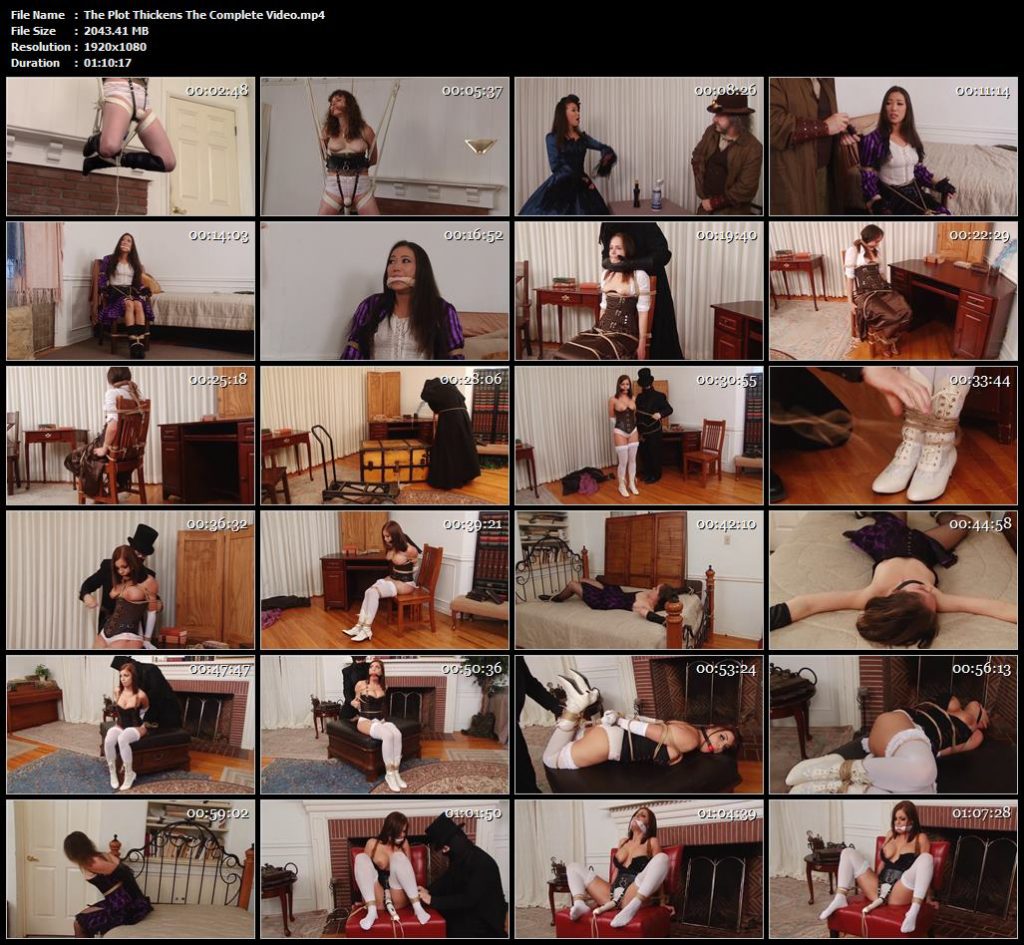 Tie up Santa Girl and do naughty things to her! – Girl Next Door Bondage – Rachel Adams