Super busty blonde beauty Alessa hears a noise just as she was about to go into the shower. She inches closer to her door just as an ominous masked figure skulks behind her. Before she knows what’s going on he slaps a piece of tape over her mouth from behind, pressing it tightly over her lips before grabbing her wrists. Her arms are pinned behind her back as he gets out the handcuffs, but she thrashes in his grasp and only with some effort do the cuffs get slapped over over wrists. She remains feisty as he lasciviously gropes her huge breasts, spanks and squeezes her sexy ass and rubs her tight pussy. Suddenly she slams her foot down on his and then runs to the door, but can’t get out before he advances on her. He displays some leg cuffs which he waves in front of her as she tries to shrink back. After some difficulty her ankles are cuffed and she is helpless as he resumes feeling her up. He then gets her to stop resisting him enough to escort her to another area of her place. She is as she is taken to a couch and unceremoniously tossed on. He removes her tapegag and they have a quick back and forth as she realizes he’s a rather common burglar with a decidedly oversexed demeanor to say the least. He handgags her while feeling her up some more and then presses another piece of tape over her mouth and presses down firmly. Left alone she resumes struggling, despite the futility of it all given that there is no way she’s going to free herself from the metal shackles. Staring at her looking as helpless as she is proves quite compelling in an erotic way as her ample chest heaves and her eyes dart about looking for an escape route. After some time on the couch, she decides to try for the door again and sneaks her way along, making sure the burglar isn’t around. Unfortunately for her, when the door is swung open, the burglar is there as it would appear he was loading up and returned to in time to intercept her! He menaces her a bit, fondling her before ‘smothering’ her into ‘submission’ as he figures he’ll have to secure her a bit better or she’ll just keep trying to get away before he can!

Some time later, Alessa finds herself bound in a precarious kind of predicament bondage that leaves her feeling a bit breathless. Handcuffs and leg cuffs restrict her limbs effectively while a rope around her neck keeps her in place (no thrashing of things could get problematic for her if she falls off the chair!). Her mouth is silenced with a piece of tape as the villain comes over to harass her. He roughly squeezing her big tits, rubs her between her thighs and presses the tape down her lips for emphasis. Since he feels as if he’s done taking her stuff and toying with her, he lets her know that he’ll be going, which leaves her feeling a bit distressed since she can’t move or speak! Her big tits get some shaking and her rapid breathing keeps them heaving as well. Lots of intrusive closeups and full body gazes convey just how hot she is in bondage. Eventually though, she tires and decides to ‘rest’ until some friendly visitor decides to check on her! 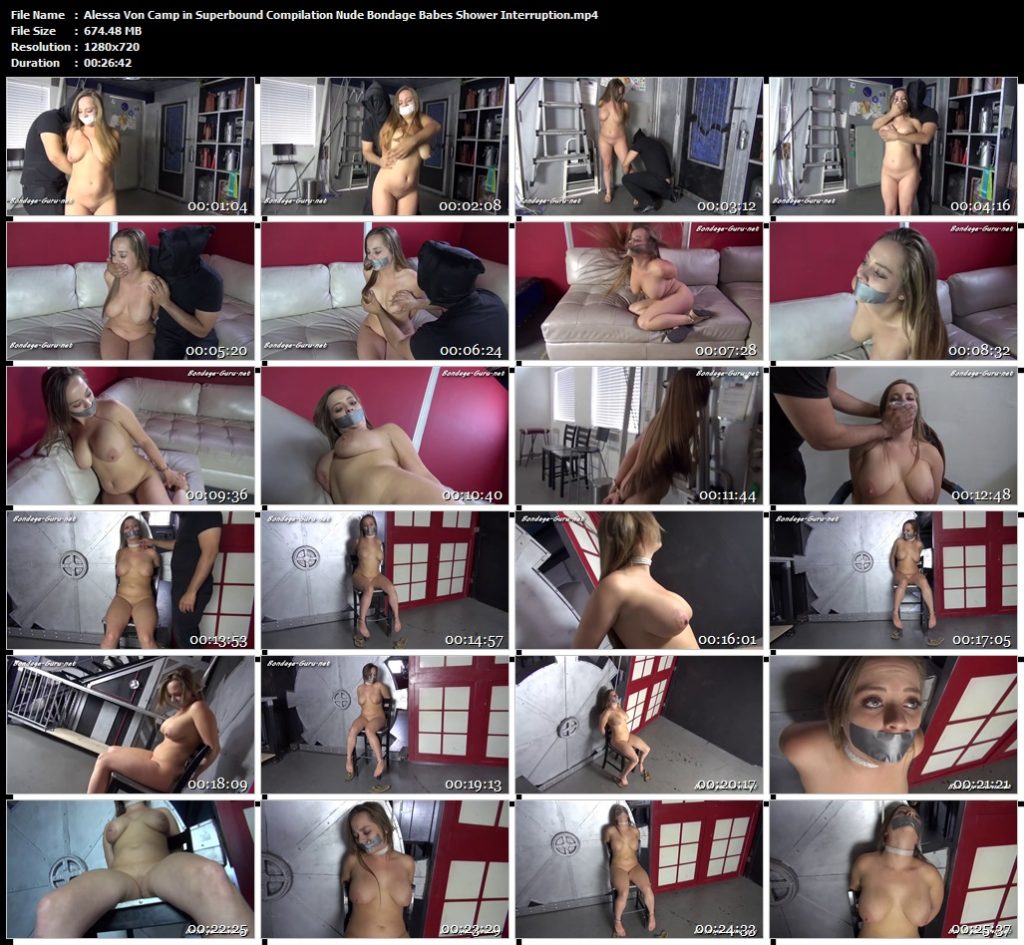