When the man approached Adara after her shift as a dancer at the gentleman’s club, she thought his proposal was harmless: Come back to his place and take a few pictures while topless and in bondage. The money sounded good and he seemed safe, so she agreed. That was her first, and last mistake! After she had been securely bound, the man brought his sadistic girlfriend in and the two began to torment the poor helpless blonde! Stuffing her mouth with a fat ball gag to stifle her cries, they started by tickling and beating the drooling, mewling girl’s bare feet. Then they stand the frightened blonde up, pop out the ball gag, stuff her mouth with cloth and cleave gag her tightly with tape! This will keep her nice and quiet when they clamp her nipples with some wicked clover clamps, threaded through the belt loops on her jeans to ensure she cannot stand up straight without tugging the chain and savaging her tender buds! She howls in anguish, but the couple merely laughs at her efforts to walk about in such a hobbled and helpless state! She’s been far too dressed for far too long, so the pull her pants off, leaving her clad only in a tiny pair of panties that barely covers her modesty, especially after a tight crotch rope has been snugged savagely into place, splitting her crotch and ass! Now the couple really goes to town on Adara, packing her mouth with even more cloth and wrapping her entire lower face with clear tape so they can enjoy the look of their silent, stuffed stupid slut!! They bend her over and begin slapping her ass, first with their bare hands and then with a leather strap that turns her ass red in seconds! Excited by all the fun they have had with the dumb dancer, they hogtie her and leave her there to struggle for the rest of the night as they head off for some of their own fun! Of course, they’ll be including Adara in their bedroom games VERY soon! 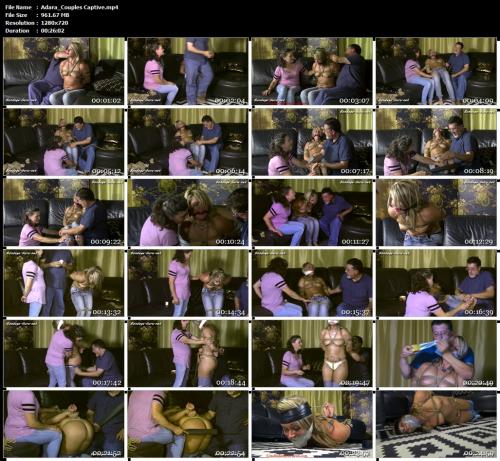