Chrissy is telling us a story about her terrifying experience of being captured in her own home, while dressed in cut off shorts and her silky black pantyhose. As she recalls the torturous events we see her peril in action…

Chrissy is getting ready for work, putting on her high heels and about to head out the door when she is surprised by an intruder! Chrissy slowly backs away in horror, but is ultimately captured and taken into the bedroom. The Intruder is a thief on the run that needs a place to hide out for the day and decides to have some fun with his new captive while he’s at it. First he ties her up on the bed with her hands tied behind her back and ankles bound tight! Chrissy struggles against the ropes to no avail. She calls out for help, but no one answers, except the thief! To silence his noisy captive he applies a VERY tight knotted cleave gag and watches his captive squirm. Her skirt lifts up as she struggles and he admires her pantyhose bound figure. After some time Chrissy is finally able to free her self and take that terrible gag out. She tries to escape but is quickly caught again by her captor, as he hand gags her to keep her quiet and then threatens her with his hand around her neck! When she is sufficiently frightened into obedience, the thief decides to humiliate Chrissy for trying to escape and forced her to strip down to her underwear and nylons. Now the Thief decides it’s time to make sure she won’t be going anywhere, he has taken quite a liking to his pretty little captive!

We then see Chrissy bound at her wrists and around her arms and breasts. The intruder stuffs a hard rubber ball in her mouth and seals it shut with clear tape as she struggles and pleads for him to stop! Then the intruder starts to play some music and orders Chrissy to dance and entertain him while bound and gagged! After she dances for him, he decides he needs to add more rope to her ankles and knees to make sure she can’t escape this time. While he is at it, he adds a very cruel crotch rope to further the torture. He clear tape gag has been reinforced with several strips of white tape. She struggles violently and can’t believe how tight her crotch rope is. The masked intruder comes back in and can’t help but to grope and fondle her squirming body, exposing her breasts and giving her a few good tugs on her crotch rope. Before he is finished, he plays with her sexy stocking covered feet as well, then leaves her helplessly bound and gagged while he continues hiding.

Chrissy struggles and squirms and tries her best to call out for help. The captor comes back in and decides that Chrissy’s gag is not enough to keep her quiet. He has been looking through her stuff and found a pair of dirty gym socks to stuff into her mouth. Chrissy begs not to be gagged with her nasty socks, but the man has no sympathy. He ties another tight cleave gag and finishes it off with an entire ace bandage tightly wrapped around her head to keep everything in place. He no longer needs his hideout, but he knows if he lets her go, she may lead the police onto him, so before he leaves he hog ties Chrissy’s gag to her feet so her head is forced to stay up and the gag is made even tighter with every move, making her think twice about how hard she struggles! Lastly, to further humiliate poor Chrissy, he ties her smelly stiletto to her face. He leaves her helplessly bound and gagged and she is forced to smell her nasty work shoe and struggle as her hogtie torturously pulls on her gag. After what seems like a lifetime of peril, she finally escapes, removes her mouth packing and tries to soothe her aching jaw, astonished at what just happened, before rushing off to find help! 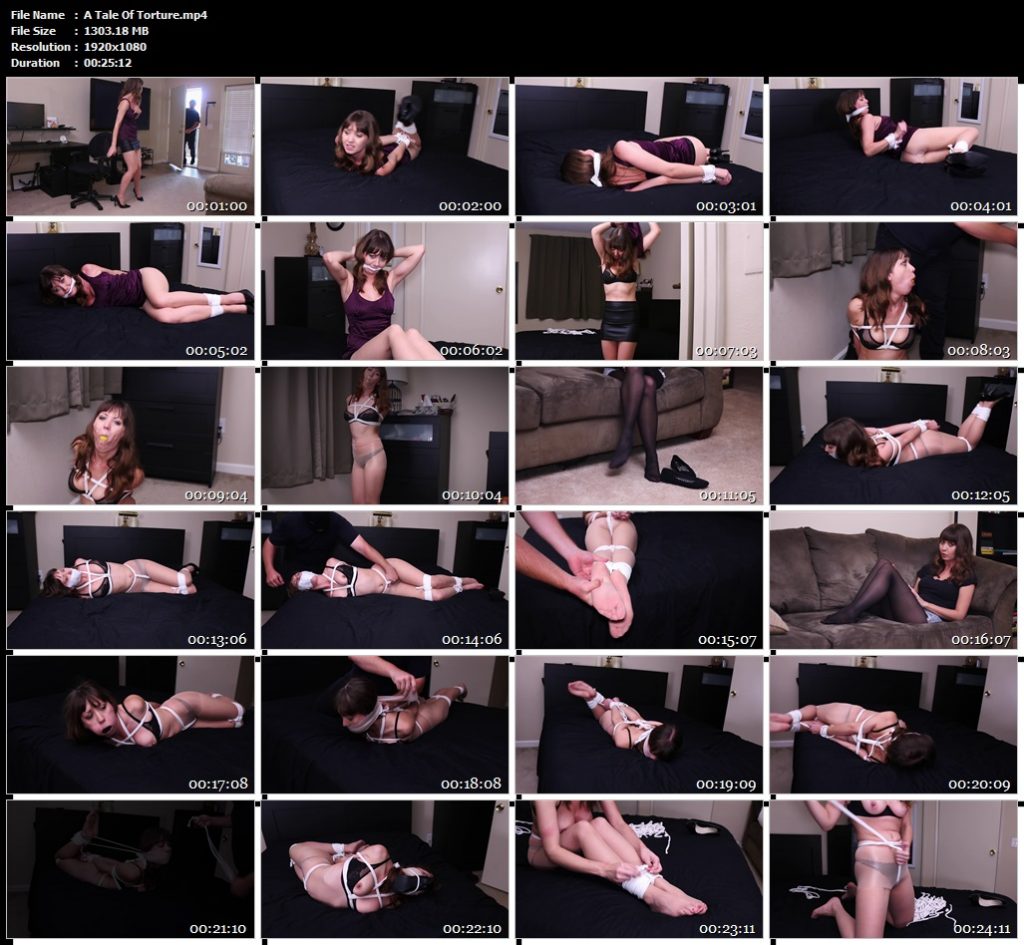