Standing neck roped in the center of the room Terra struggles to free herself. She fights him as he begins to add rope. Starting with a deep crotch rope he ties her legs. She realizes the severity of her situation and taunts the man. Saying is that all you got. She says I could be out of this in 5 mins. He finishes her legs and sits her down. Tired of hearing her mouth he wraps a deep cleave gag on her. After putting her in a severe chicken wing he now taunts her with. What was you saying about being out in 5 mins. He stands her up out of the chair and forces her to the floor. Arching her up in a sadistically tight hogtie. He finishes her off by tying her head off to her feet. She can can barely move little loan escape. She just have to deal with the pain till he decides to release her. If that time will ever come. 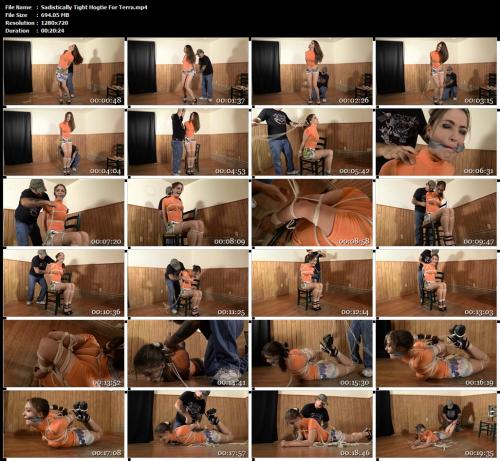 She Was Hogtied With Twine – Brendas Bound Bondage Addictions