Carley and Trisha have taken a taxi for a rave party in the countryside but they have had problems with the address and they lost.. So, after checked that the mobiles don’t work, they decide to separate and to search someone in the area and ask some help… Carley found a worker and go to ask him to help her, but, after few seconds of discussion, he grabbed her and he ties her hands with ropes, then he puts a stuff into her mouth and he cleavegag her with a long bandage wrap… Then he puts her in topless and he ties her body, but, when he starts to go away with her, Trisha arrives and push and hit him on his back, escaping with Carley… The two girls are scared and turn around try to hide themself from him..But he finds them again, this time he grabbed Trisha while Carley run away…Trisha’s hands are tied on her back and she’s gagged with a stuff into her mouth and with a white bandage wrap over her mouth and then , he takes her inside the old industrial building…Carley in the second chick grabbed in the woods and carried over the shoulder of the man, taken inside the industrial area and tied close to Trisha ( feet and legs) and blocked togethers with ropes…Then , he puts some pieces of tape over Carley’s lips and he goes to take some beers and some special toys for the party… HD VIDEO. 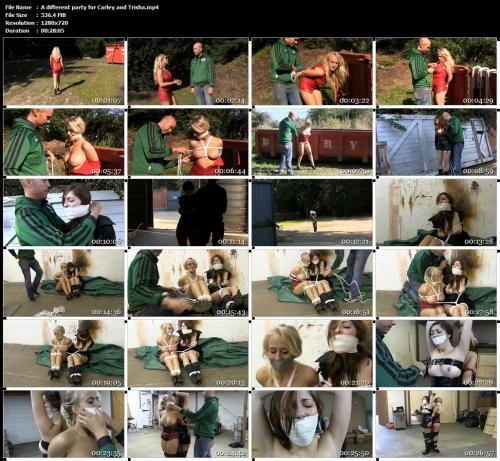 Altsiren in troubles – The attic of Jack Bond

A strange package – Final part – The attic of Jack Bond

The role playing gone bad… – The attic of Jack Bond

Where is my package? – The attic of Jack Bond