Your girlfriend Ashley has been wanting to experience bondage for a while now and bashfully asks if you will help her. You agree and she brings out her bag of toys and pulls out a pair of handcuffs. She kneels on the couch and asks you to cuff her wrists tightly behind her back. Next she wants you to grab the ankle cuffs from the bag and so she can experience being hogcuffed. So you put her in the hogcuff and you agree when she asks if you want to see her struggle. She starts struggling and gets more and more turned on by her bonds and you watching her. Ashley wants more and suggests that maybe you guys move upstairs to the bedroom. You undo the hogcuff but keep her hands and feet cuffed. She gets up from the couch and slowly shuffles her cuffed legs up the stairs. 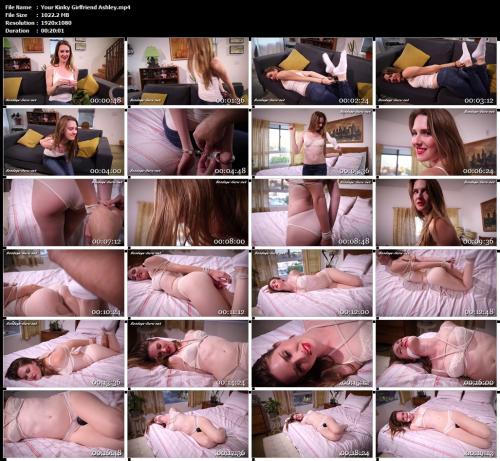 Gag Me and you can do whatever you want to me! – Girl Next Door Bondage – Ashley Lane