Vivienne had started a new hobby, dancing! She was in love with the costumes and the shoes and the athleticism and was hoping to get into a good studio. Having applied weeks before, her audition was to be today. She was so excited as she dressed that morning, putting on her new lotard, tights and heels. She was about to walk out the door when a man burst in and grabbed her. She was stunned enough that he was able to wrap rope around her wrists and elbows, knees and ankles. Quick as a flash, she was gagged not once but twice, a red handkerchief and purple vetwrap sealing her fate. She was unintelligible as she struggled in the uncomfortable rope.

Things got a little bit worse after the man was finished rummaging around in her kitchen. Knowing how lithe and strong Vivienne is, he added more rope behind her neck and around her knees, bending her over and severely limiting her ability to move! Poor Vivienne was having such a good day and now she had to deal with this! Let’s hope the admissions office was understanding and let her reschedule! 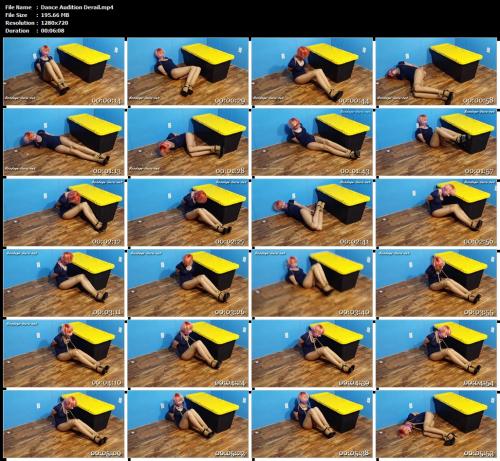 Vivienne Velvet in Black Lingerie and Bent Over Bondage

Vivienne Velvet is Hogtied and Necktied in Heels

Vivienne Velvet – Back Arched and Crotchroped

Constance and Tara_Tied Sightless and Soundless Taken # 501B