This story takes place a few hours after where ‘Tricked into Imprisonment’ left off. Chrissy has been transported from the testing facility to a prison where she has been locked inside of a cell. She finds herself in quite the compromising situation. She is on the floor of her cell wearing a very tight orange spandex jumpsuit. She is very, very tightly bound in an excessive amount of ropes and her hands have already been taped together tightly in microfoam tape. There is a metal chain that is attached to the back of Chrissy’s bindings that has tethered her to her cell. She has a ballgag strapped around her neck, but not yet in her mouth. Chrissy struggles and looks around the room saying “I feel like I’ve been tricked or something. I don’t understand how I’m supposed to get out of all of these ropes by myself.” She looks down and around at her body and the excessive amount of ropes and sighs before continuing to struggle some more. “Plus, my hands and fingers are all taped up. I can’t even use them at all. How am I supposed to get free?” Chrissy continues to struggle, but cannot seem to get anything to budge. “If I knew this is what I would be getting myself into, I wouldn’t have signed that contract. There is literally no escaping this.”

Chrissy’s eyes widen in surprise and fear as a prison guard enters her cell area. She asks him “Can you please untie me? I seriously can’t move at all. I’m never going to get out of this without your help.” The guard does not respond and kneels down behind Chrissy to unbuckle the ballgag that is dangling around her neck. “Oh no! Please don’t gag me. I promise I’ll be.” Chrissy’s words are interrupted as the rubber ball is shoved into her mouth and strapped very tightly behind her head. “Please, I’m tied up so tight. Can’t you just let me go?” she says through the gag. Chrissy’s eyes widen again as she watches the he guard take a roll of microfoam tape. She says while ballgagged “No please, not the tape. I can’t talk like this.” The guard stretches the piece out and applies it to Chrissy’s already ballgagged mouth, pressing each little section on to ensure that the ballgag and lips can be seen through the tape. The guard stands and looks down at Chrissy for a moment admiring his handy work. Chrissy looks up at him in fear with eyes pleading for release. The guard turns and walks out, leaving Chrissy to struggle helplessly.

Chrissy struggles desperately as she tries to escape the ropes while gag talking to herself. “I can’t believe I’ve been locked up in prison. How am I ever going to get myself out of here?” She looks around her cell for some possible way to get out. She tries to yell or help, but there is no one even close that can help her. “Somebody please help me. I don’t belong in here.” Chrissy continues to struggle for a while before saying “This is one heck of a situation that’s I’ve gotten myself into.” She takes a few moments to look around at her body again in the tight ropes. “I’m never going to get myself out of this.” Chrissy continues to struggle and gag talk for the remainder of the video, completely helpless and double gagged while trapped in imprisonment. 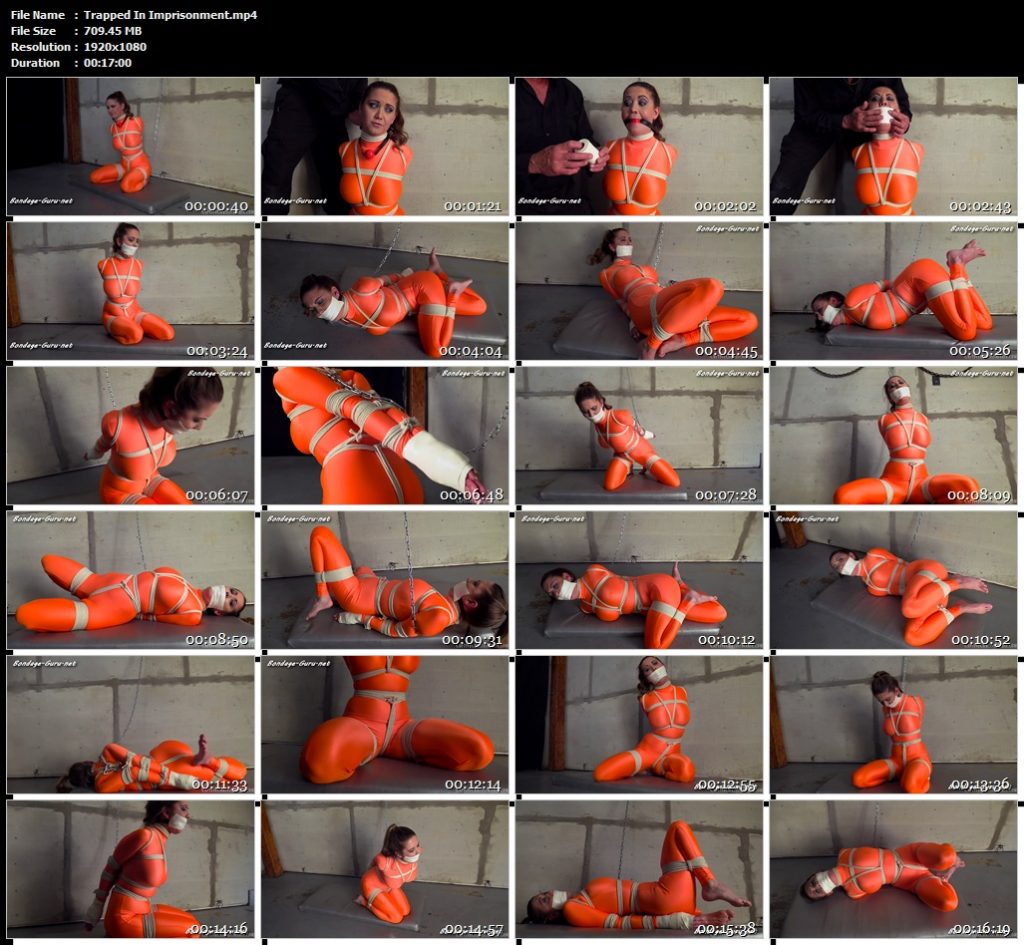 I Need To Be Bound & Gagged So Badly! – Captive Chrissy Marie