Curvy ethnic maid Vanessa Luxxx comes into the bedroom with the pretense of cleaning, but her real intent was to steal. Her employer was pretty wealthy and wouldn’t miss a few dollars. Vanessa checks the pockets of the pants laying around and is disgusted to find only change. She opens the sock drawer and finds bundles of bills rolled up in bank rolls. She grabs a roll of five hundred dollar bills and stuffs it into her dress. A nice $500 bonus she smiles to her self, but her celebration mood is broken when she hears a noise in the closet. She turns around and is surprised to see her employer’s son come out of the closet holding a video camera. Vanessa tries to think fast to explain away her actions and to beg him to forget what he seen. She thinks that the youth can be bribed into silence. Vanessa caught him many times staring at her ass and legs and heard him bragging to his buddies about his hot maid. Vanessa thinks she might be able to seduce him into silence. They walk into the living room and Vanessa turns on the tears begging him to keep quiet. But the little punk has his own plans, he tosses her a bundle of rope and orders her to tie her legs together with the rope. Vanessa is afraid to piss him off and thinks that if she stalls him long enough and keeps talking that he will let her go. Vanessa ties the ropes around her legs above her knees, then she ties another rope around her ankles. The last rope she ties around her thick thighs. He then orders her to put her hands behind her back, Vanessa continues to beg and plead as he ties her arms. After he ties her arms he disappears leaving his hot maid helplessly bound on the sofa. Vanessa squirms in the rope complaining that ropes are too tight. The ropes the brat tied around her upper arms bite deep into the soft flesh around her upper arms. She struggles helplessly in the tight ropes calling for Johnny to come back and untie her. She struggles onto the floor, her skirt ride up her ample ass exposing her pantyhose covered behind as she struggles. Finally the boy comes back into the room and Vanessa begs and pleads with him to untie her, she tells him that he can keep the money and that they need to keep this their own little secret. But the boy is tired of her complaining and pulls a pair of his mother’s panties out of his pocket and waves it in front of Vanessa’s face. Vanessa protests telling him that he is not going to gag her with that, but he laughs at her and stuffs her mouth with the panties and wraps her pretty face with layers of elastic. He then adds more rope attaching her wrists to her ankles in a tight hogtie. Helpless Vanessa struggles helplessly on the floor in the cruelly tight hogtie. She can barely move, all she can do is roll from side to side. She begs and cries for help into the gag but her muted cries go unanswered. She struggles for what seems hours sobbing into her gag. 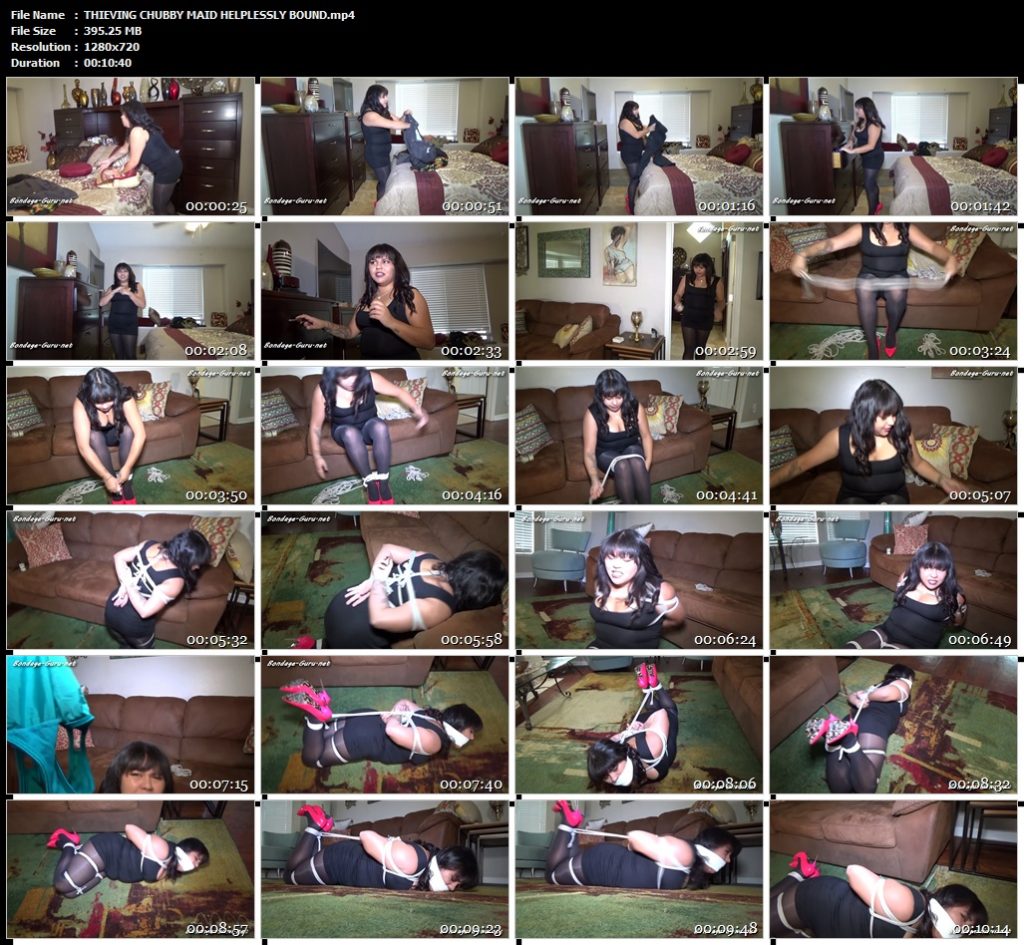