Chrissy wants you to tie her up, but first she wants to play with some gags! She laughs and flirts with you (pov) as she applies and tests out each gag with plenty of gag talk! She starts with a simple strip gag with duct tape, but she feels it isn’t effective enough, so she decides to stuff a white cloth in her mouth and try a wraparound tape gag next! Much more effective, you can barely understand a word of her gag talk with her mouth packed so full! But she has one more gag she wants to try that she thinks will be even more effective! She slowly peels off the many layers of tape wrapped around her head and leaves the stuffing in her mouth, proceeding to very tightly gag herself with micro foam tape wrapped around several times! She then models her sexy outfit for you while gagged. She is very happy with this gag and is ready for you to tie her up now, except she wants you to use tape instead of rope! She hands you a roll of tape indicating that she is ready to be bound. (Off screen taping) Next we see Chrissy all taped up and playfully struggling and testing her bonds as you watch and enjoy the show! 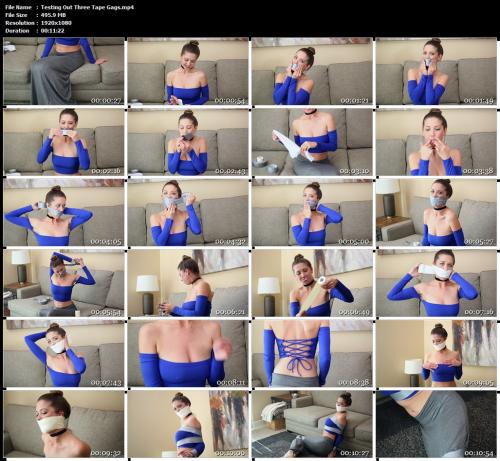