Chrissy’s ransom never got paid so she is now in permanent captivity and her captor still has her tied up tightly with rope and gagged with a big red ball gag! She has been tied up so tight for so long and now she is better able to tolerate the extreme predicaments he leaves her in. She is even starting to get some enjoyment out of it, especially due to the extra tight crotch rope that tightens up as she struggles!

The scene starts with her gag talking “Oh no, you captured me and now I’m liking it so much, please tie me tighter”. Chrissy struggles helplessly in three separate ties, each one becoming tighter than before! He can’t have her enjoying this too much, so he stretches her arms over head so high that she is frog tied on knee point and nearly suspended! She twists, turns and squirms in her shiny red bodysuit as she tries to maintain her balance, struggling to escape, even though by now she must have learned that his knots are completely inescapable!

Later Chrissy is temporarily relieved of her arms over head position, but she is still be tightly bound and ballgagged and left to continue her struggle on the floor! She squirms and rolls around while still frog tied, in two torturous arm binds! He made sure to still attach her wrists to her crotch rope so she can enjoy herself as she struggles helplessly on the garage floor! 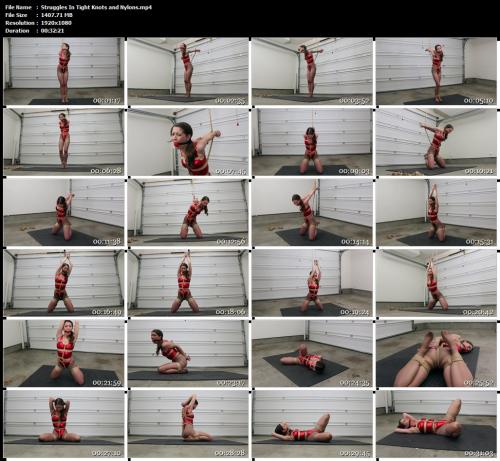 Tied Up In My Turtleneck – Captive Chrissy Marie